LPL not subject to possible fines in SII Investments case

SII Investments faces charges of dishonest and unethical conduct, along with failure to supervise. The case marks the latest compliance snafu for one of the four independent broker-dealers whose assets were recently purchased by LPL Financial.

SII sidestepped its own policies and Massachusetts rules for the past six years through “systemic inflation” of its clients’ liquid assets in sales of nontraded REITs, state regulators announced last week. Investigators say many of the 93 transactions worth $4.7 million violated limitations on the products.

Terms of LPL’s purchase of SII’s parent, National Planning Holdings, place liability for any penalties stemming from past conduct on the seller, Jackson National Life Insurance, according to LPL. The provision applies to the fines and refunds state regulators are seeking from SII, an LPL spokesman says. LPL acquired the four firm’s assets last month. 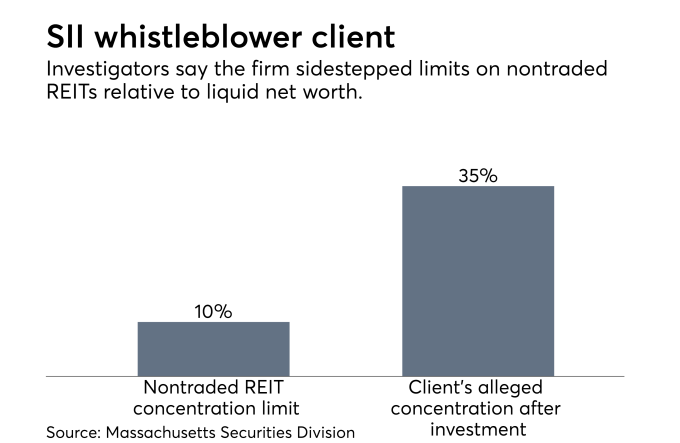 SII counted assets held in annuities as liquid on internal compliance documents despite the high surrender fees in the products, according to the Massachusetts Securities Division. The charges represent the second major case this month involving SII, the 31st largest IBD.

As a result of the incorrect classification, SII brokers avoided strict asset-based limits on the concentration of nontraded REITs in clients’ portfolios, regulators say. For at least 20 clients with holdings in annuities, advisors recorded identical figures for net worth and liquid net worth, according to investigators.

“SII allowed its agents to inflate a customer’s net worth to sell high commission non-traded REITs in violation of Massachusetts guidelines and its own policies,” Secretary of the Commonwealth William Galvin, who oversees the state Securities Division, says in a statement.

“A firm must have real and meaningful supervisory procedures to prevent inappropriate sales. This firm did not have those, and Massachusetts investors suffered.”

A spokeswoman for SII declined to comment on the allegations. The firm has 30 days to respond formally to the charges prior to administrative hearings in the case.

BLOWING THE WHISTLE
The state Securities Division opened an investigation into SII after a 63-year-old nurse brought her case to their attention last July, according to charging documents. SII brokers sold her a $50,000 nontraded REIT in 2014 even though most of her assets were already tied up in three annuities, investigators say.

The nurse, who had informed SII that her health problems made it difficult for her to read and understand financial documents, subsequently became unemployed, according to investigators. By that time, products with surrender charges made up 90% of her net worth, leaving her without access to money she needed for herself and her daughter, regulators say.

ASSESSING THE DAMAGE
SII brokers collected $3,500 in commissions for selling the nurse the nontraded REIT, and SII and its agents collected more than $300,000 in commissions for all sales of REIT investments in the state, the complaint alleges. Regulators filed for a full accounting of all losses to clients and sales profits, followed by refunds and disgorgement.

SII acted well before federal prosecutors and SEC enforcement officials in the last case involving the firm. A former SII broker was hit earlier this month with criminal and civil fraud charges, but SII fired him back in 2014.

“Under the construct of our agreement, LPL would not be liable for this matter,” Mochal says in a statement.

One compliance expert, however, warns that the $325 million deal may lead to unforeseen legal and regulatory expenses, despite LPL’s due diligence and bulked-up staffing. LPL plans to add more than 600 back-office staffers, many of them in compliance, to help with onboarding NPH’s 3,200 advisors.

“The bigger you are, the more attention you’re going to get from regulators,” says Cipperman Compliance Services founder Todd Cipperman. “Regulators read the press too, and they’re going to want to hold them accountable.”