Did YieldStreet Admit to Conducting Poor Due Diligence?

Sonn Law Group has been retained to investigate allegations of wrongdoing at YieldStreet. If you or a family member has suffered losses investing, we want to discuss your case. Please contact us today for a free review of your case. 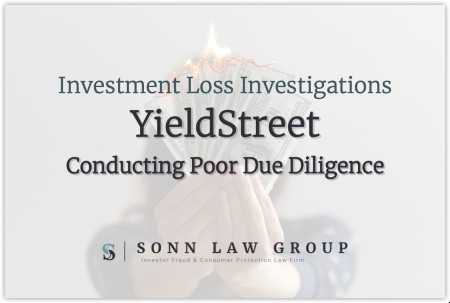 In September 2019, YieldStreet filed a complaint against Arena Investors and Baxterville LLC (“Defendants”) alleging that they had been fraudulently induced to pay the Defendants $12 million in September 2018 to participate in a loan to a group of companies (“Falcon”) operating oil and gas wells in central Louisiana.

The complaint states that YieldStreet made securities tied to Falcon’s repayment of the loan available to hundreds of individuals on YieldStreet’s investment platform. The individuals eventually purchased $12 million worth of such securities. YieldStreet alleged that despite the Defendants’ knowledge that Falcon was “failing on all metrics”, the Defendants failed to inform them of such information and provided them with outdated, misleading information instead.

Did YieldStreet admit to failing to conduct proper due diligence when selling the Falcon-backed securities to its customers? That is for a judge or jury to decide.

If you suffered losses investing in YieldStreet, we are here to help. For a free consultation, please call us now at 866-827-3202 or complete our contact form.