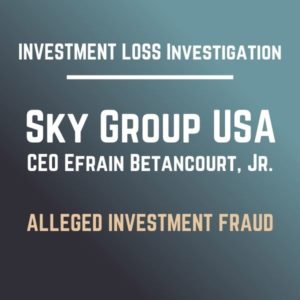 The SEC has alleged that this payday loan company – based in Miami – of fraudulently raising at least $66 million through the sale of promissory notes to more than 500 retail investors, including members of the South Florida Venezuelan-American community.

The Sonn Law Group is closely monitoring the situation and is interested in speaking with individuals who have invested in Sky Group USA and CEO Efrain Betancourt, Jr. Promissory note scams are far too common, and when combined with apparent affinity fraud as the SEC has indicated in this case, victims need qualified representation to advocate on their behalf.

Were you solicited to invest in Sky Group USA LLC?
Submit the short form below to discuss your potential legal remedies.

The SEC announced charges against Sky Group USA, LLC, a Miami-based payday loan company, and its CEO, Efrain Betancourt, Jr. The SEC’s allegations claim that Sky Group and Betancourt fraudulently raised at least $66 million through the sale of promissory notes to more than 500 retail investors, including members of the South Florida Venezuelan-American community.

The SEC’s complaint alleges that Sky Group and Betancourt falsely told investors that Sky Group would use investors’ money solely to make payday loans and cover the costs of such loans, when, in reality, Betancourt misappropriated at least $2.9 million for personal use – including for his lavish wedding at a chateau on the French Riviera, vacations to Disney resorts and the Caribbean, costs associated with the purchase of a luxury Miami condominium, and service on his personal Piper airplane – and transferred at least another $3.6 million to friends and family, including his ex-wife, Angelica Betancourt, and to EEB Capital Group LLC, an entity whose bank accounts Betancourt and his current wife control.

Sky Group and Betancourt are charged with violations of the registration and antifraud provisions of the federal securities laws and additionally charges Betancourt with acting as an unregistered broker. The complaint also names as relief defendants Angelica Betancourt and EEB Capital Group LLC in connection with their illicit receipt of investor funds.

The Sonn Law Group is currently investigating allegations surrounding Sky Group USA and its CEO, Efrain Betancourt, Jr. We represent investors in claims against negligent brokers and brokerage firms. If you or your loved one experienced investment losses, we are here to help. For a free consultation, please call us now at 866-827-3202 or complete our contact form.