Can I Sue My Sigma Financial Advisor? 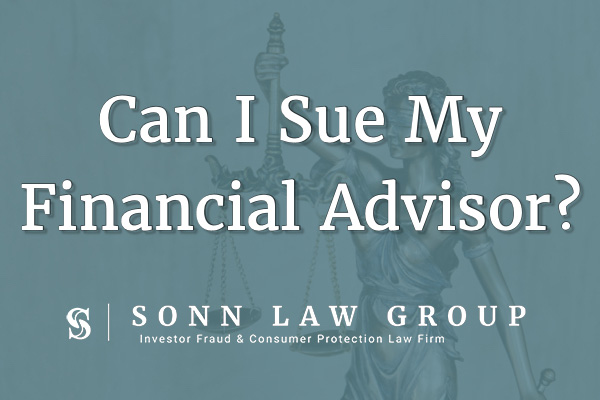 The answer is: Yes, you can sue your Sigma financial advisor. You can file an arbitration claim to seek financial compensation when an advisor – or the brokerage firm they work for – fails to abide by FINRA’s rules and regulations and you suffer investment losses as a result.

On August 1st 2016, FINRA’s Department of Enforcement fined Sigma Financial Corporation $100,000 and ordered the broker-dealer to pay $92,053.63 in financial restitution for unlawfully overcharging its customers. According to investigators, the brokerage firm failed to properly identify and apply available sales charge waivers on certain investment products.

Brokerage firms have a legal duty to charge investors fees that are appropriate. It is a violation for brokers to overcharge clients for the benefit of the firm’s own bottom line.

Without admitting to or denying the allegations in this case, Sigma Financial consented to the financial penalties.

In June 2016, an investor with Sigma Financial brought a claim against the brokerage firm before a FINRA arbitration panel based in Detroit, Michigan. In making the claim, the investor raised several different causes of action, including:

After assessing all available evidence presented by each party, the arbitration panel sided with the investor, ordering Sigma Financial to pay $40,000 in compensatory damages.

Under FINRA rules, registered brokerage firms are required to create and maintain a supervisory system that reasonably ensures compliance with all relevant securities laws and industry regulations.

Not only are broker-dealers obligated to create written supervisory procedures, also known as WSPs, but firms must also regularly inspect and review the actions of their individual brokers. Indeed, brokerage firms must have a well-staffed compliance department, with the ability to oversee the action of all of the company’s securities representatives.

Among the many things included in this requirement is that brokerage firms must conduct on-site inspections of all branch offices on a periodic basis. From early 2011 through the summer of 2012, FINRA’s Department of Market Regulation determined that Sigma Financial Corporation had serious deficiencies in its supervisory system.

Specifically, FINRA investigators found that Sigma Financial Corporation only had three full-time supervisory agents in the field. These three agents were responsible for overseeing the actions of nearly 1,300 registered securities representatives who were working out of more than 800 separate branch offices spread throughout the entire country.

FINRA regulations require in-person inspections to be conducted at all branch offices at least once every three years. However, due to Sigma Financial Corporation’s lack of compliance personnel, several of the brokerage’s firm branch offices were not inspected within the mandated time-frame.

As a result of the misconduct, the broker-dealer was publicly censured, ordered to fix the deficiencies in its supervisory procedures and fined $185,000.

Registered broker-dealers are legally responsible for the conduct of their securities representatives. Unfortunately, in several different cases, Sigma Financial Corporation brokers have been accused of causing serious financial damage to customers through their negligence.

For example, Robert Soldat (CRD#: 2971791), a former Sigma Financial broker, who was based in a branch office in Newbury Park, California, has settled at least eight different TIC-related investor complaints in the last five years, including for the following amounts:

Mr. Soldat was far from the only Sigma Financial broker who had negligence complaints filed against him for failed tenant-in-common investments. This was a serious problem within the firm.

Another broker, Tomas Velken (CRD#: 1600404), who was based in a branch office in Lafayette, California, also settled several TIC investment negligence cases, with amounts including:

Notably, TICs are risky, illiquid and simply unsuitable for most ordinary investors. As they are private placements, they have no viable secondary market to trade on, and, when something goes wrong, investors are usually stuck owning TICs.

While tenant-in-common investments were quite popular in the early and mid-2000s, they are far less common in today’s investment market. The primary reason for this is that they have been exposed as an extremely problematic investment.

In fact, TICs were even a conduit for outright fraud. One of the most prominent companies offering the TIC financial products that were being sold by brokerage firms, DBSI Inc., turned out to be a Ponzi Scheme.

Yet, in many different cases, Sigma Financial brokers pushed these products on clients who were seeking relatively safe growth. In reality, TICs were anything but a safe investment.

If you lost money investing in a TIC, or any other type of unsuitable investment product, you should consult with a lawyer as soon as possible.

At Sonn Law Group, our securities fraud attorneys have helped many people recover full financial compensation for their investment losses.

If you have a complaint agains Sigma Financial Corporation, do not hesitate to call us today at (844)689-5754 or contact us online to request your free, fully confidential case evaluation. Our law firm takes on all cases on a contingency basis, so we only collect our legal fees if we settle or win your case.