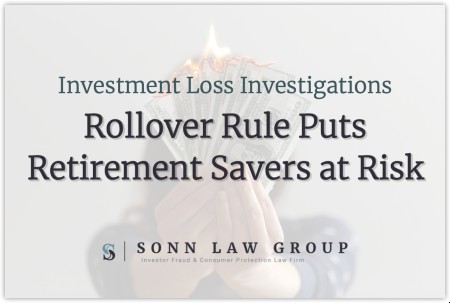 The Department of Labor recently submitted a proposal to revise investment advice rules for retirement accounts.

The proposal would provide a prohibited transaction exemption (“PTE”), allowing retirement plan investment fiduciaries under ERISA to receive compensation as long as they act in the best interest of the participants of the retirement plan, such as commissions, 12b-1 fees, and revenue sharing, that would otherwise be prohibited.

This includes when the investment advice fiduciary advises the retiree to roll over assets from a plan to an IRA. Additionally, the package restored the 1975 five-part test on conditions for advice to be considered “investment advice”.

The DOL held a public hearing on September 3, 2020, where it heard from panels of individuals who recommended a range of changes to the proposal. Witnesses at the hearing stated concerns about the five-part test restored by the package. Advocates for investors expressed worry that the test would allow too many financial advisers to avoid fiduciary duties under ERISA.

Sam Edwards, President of the Public Investors Advocate Bar Association, stated, “[w]e’re going to see advisers look for loopholes and get around ERISA. . . . The regulation, if implemented, will result in ERISA’s fiduciary obligations applying to very few of the advisers who investors rely upon.” Additionally, Edwards stated that the new regulation would weaken the fiduciary standard, especially regarding the proposed PTE.

Barbara Roper, the Director of Investor Protection for the Consumer Federation of America, reported that retirement savers would be harmed by the proposed regulations because advisers giving rollover and lump sum advice would no longer be held to a fiduciary standard. Roper echoed Edwards’s warning that advisers would use the proposal to avoid fiduciary obligations, even when the retiree will be reliant on any advice they are given.

The issue is exacerbated by COVID-19, which has caused financial devastation to millions in the United States. Many individuals struggling with unemployment are withdrawing their retirement funds as a last resort, making them especially vulnerable to self-interested financial advisers.

“The proposed changes by the DOL will allow broker dealers to avoid fiduciary obligations on rolling over pension plans to IRAs, even when the retiree is primarily relying on the recommendation by the advisor as the basis to do a rollover from their pension to an IRA, and they don’t understand that the rollover may not be in their best interest, and yet the advisor has an undisclosed conflict of interest,” said Jeff Sonn, Esq. of Sonn Law Group, who has represented thousands of investors over three decades.

“Time and time again I have seen a rollover recommendation made based on faulty advice of an advisor who did not tell the retiree that they were better off keeping their pension, rather than rolling over to an IRA because the advisor stood to make significant fees upon the rollover, including unsuitable recommendations of the sale of annuities,” added Sonn.

“This has been particularly hard on state or municipal employees, such as police officers and even Judges that I saw were misled into rolling over their defined benefit plans that had cost of living increases, into an IRA that was not in their best interests, just so the advisor could sell them annuities or other products,” Sonn said.   The new rollover obligations do not enforce any fiduciary duty standard, which is very bad for investors, Sonn concluded.