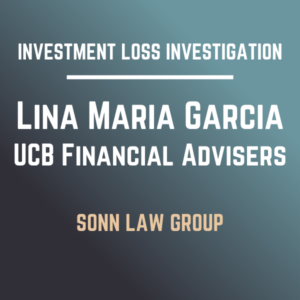 INVESTORS: The SEC has alleged that president and chief compliance officer of Miami-based UCB, Lina Maria Garcia, has defrauded clients by funneling profitable trades to two accounts and diverted losing trades to other client accounts.

If you have experienced investment losses after working with Lina Maria Garcia of UCB Financial Advisers, call the Sonn Law Group anytime at 844-689-5754 or complete the intake form below to speak with a legal professional from our firm about your options for recovery.

Worried about your investments with Lina Maria Garcia?
Submit the short form below to schedule a free consultation.

What are the Specific Allegations Made Against Lina Maria Garcia in the SEC Complaint?

Below is the text from the SEC’s complaint regarding Lina Maria Garcia of Miami-based UCB Financial Advisers:

1. Defendant Sugranes, through UCB Advisers and UCB Services (collectively, the “UCB Entities”), engaged in a long-running fraudulent trade allocation scheme – commonly referred to as “cherry picking.” Defendants’ allocated thousands of profitable trades worth more than $4 million in stocks and options on securities (“Options”) to two preferred accounts held at the UCB Entities in the name of the Relief Defendants Ramiro Sugranes Hernandez and Thelma Lanzas De Sugranes, who are Sugranes’ parents or relatives (collectively, “Preferred Accounts”).

Sugranes also allocated millions of dollars of unprofitable trades to other investment advisory client accounts with the UCB Entities. This scheme is ongoing. The SEC brings this enforcement action to stop this fraud and return the ill-gotten gains to the harmed investors.

2. Sugranes perpetrated this fraud through UCB Services and UCB Advisers, an investment advisory firm of which he is a partial owner. He carries out the cherry-picking scheme by first using an average price trading account used by the UCB Entities to purchase stocks and Options on behalf of numerous client accounts. Sugranes then allocates those trades to specific accounts, typically later that same day. If the position increases in value during that day, the position is usually closed out, thereby locking in the same-day profit, and the opening and closing trades and the corresponding profits are allocated to one of the Preferred Accounts.

If the value of the trades decrease during that day, the position (which is worth less at the time of allocation than it was at the time of purchase and thereby has a first day loss) is usually allocated to the account(s) of one or more of the UCB Entities’ other clients (the “Non-Preferred Accounts”).