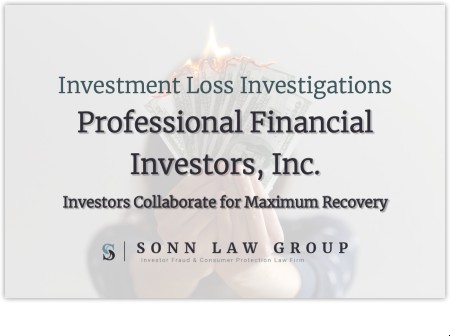 Instead of working against each other, the Ponzi scheme victims joined together in an attempt to prevent further losses.

When California real estate mogul Kenneth Casey passed away in May of 2020, his ex-wife was named the trustee of his estate, making her responsible for winding up Casey’s business operations. Casey founded two California-based companies, Professional Financial Investors, Inc. (PFI) and Professional Investors Security Fund, Inc. (PISF) and offered a variety of ways to invest in the two companies. Casey reportedly told investors that their money would be used primarily to invest in multi-unit residential and commercial real estate that PFI would manage. Despite these claims, the investor funds were being used in a Ponzi-like fashion to pay existing investors. Casey reportedly told PFI employees to falsify financial statements that were issued to investors to give the impression that the investments were “safe and profitable.” Casey also allegedly misappropriated over $10 million from investor funds.

Casey’s scheme reportedly affected more than 1,300 investors. After the scheme came to light, Casey’s companies voluntarily filed for Chapter 11 bankruptcy. Once investors were notified of the scheme and that most of their investments were lost, several individual investors sprung into action. Keith Merron, a 64-year-old investor who lost nearly all of his retirement savings, reported that he was on a Zoom call with dozens of other investors within 24 hours of hearing the news.  Merron said he insisted to other investors that they should pool their knowledge, refrain from hiring individual attorneys, and consider the benefits of working together. The investors created a website, several Facebook groups, and an online database to locate other defrauded investors, eventually accumulating over 950 names. The group hired attorneys that agreed they would work together and formed ad hoc committees to advocate for the different types of investments that exist in the case. The U.S. Trustee’s Office initially sought to appoint a trustee to the case, but after a petition filed by investors with 868 signatures, the motion was denied.

The collaborative nature of the investors has been applauded by multiple bankruptcy experts. In fact, the law firm handling the lawsuit on behalf of abuse survivors against Boy Scouts of America adopted the investors’ methods to engage with the class of victims.

The investors reportedly expect to recover between 35-50% of the estimated $300 million they are owed.

The Sonn Law Group is currently investigating allegations surrounding Kenneth Casey’s alleged Ponzi-scheme. We represent investors in claims against negligent brokers and brokerage firms. If you or your loved one experienced investment losses, we are here to help. For a free consultation, please call us now at 866-827-3202 or complete our contact form.