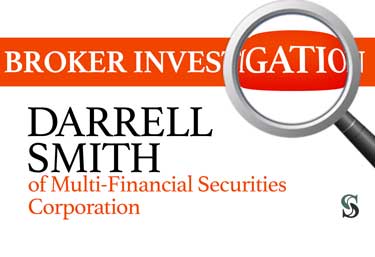 A former registered broker and investment advisor, Darrell Smith (CRD#: 1685641) was barred from the securities industry in November of 2014. Prior to his expulsion, Mr. Smith was employed at Multi-Financial Securities Corporation in Mason City, Iowa.

During his time in the industry, regulators determined that Darrell Smith repeatedly and blatantly defrauded investors.

On October 9th, 2018, the United States Attorney’s Office for the Northern District of Iowa announced that Darrell Smith has been sentenced to 175 months in federal prison. As the lead prosecutor on the case noted, this sentence brought “justice to a shameless con artist.”

According to the indictment, Darrell Smith executed a fraud scheme that was targeted directly at elderly and vulnerable investors. Unfortunately, elder financial fraud remains a very serious problem. In this case, Mr. Smith is alleged to have made unauthorized withdrawals of at least $2.4 million from ten different investors between 2010 and 2013.

He took the money he stole from clients, and transferred into a company called Energae, LP. This was a partnership that he owned along with another individual. He used the funds in it to invest money into a wide range of different speculative bio-energy companies for himself.

In order to get the fraudulent account transfers authorized, Mr. Smith forged the signatures of some customers and used pre-signed authorization forms for others.

Notably, Darrell Smith received a heightened prison sentence because the judge determined that he attempted to obstruct justice. According to the U.S. Attorney’s Office, Mr. Smith tried to coerce one of the investment fraud victims into not testifying in the case.

In addition to serving nearly fifteen years in prison for fraud, Mr. Smith has also been ordered to pay more than $1 million in financial restitution to affected investors.

At Sonn Law Group, we are committed advocates for investors nationwide. If you lost money due a scam artist or fraudster, you need to take immediate action to protect your rights. For a free, no risk consultation, please contact our law office today.