GPB Capital Has Been Accused by the SEC of Defrauding Investors.

Did your broker/advisor recommend investing in GPB Capital? Did you suffer losses in your investment accounts as a result? If so, click here or call 844-689-5754 to contact the Sonn Law Group immediately to discuss your situation. Our firm can help you file a lawsuit to attempt to recover your GPB Capital Holdings losses.

Browse all news and updates related to GPB Capital below.

Did your advisor recommend investing in GPB Capital? 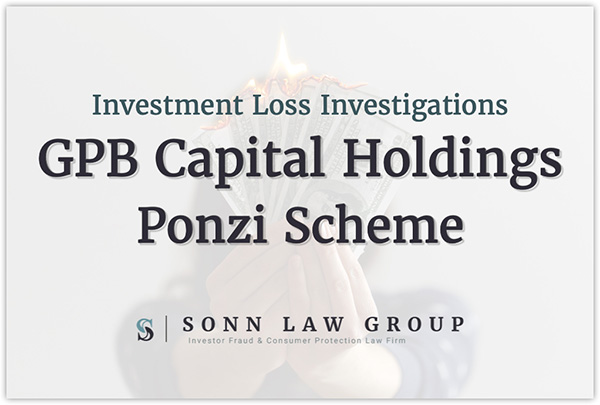 In the fall of 2018, GPB announced that it was halting sales to new investors and suspending redemptions to address accounting issues. The following funds were affected:

This company is now being investigated by regulators and law enforcement as a potential Ponzi scheme. If you are an investor who lost money in GPB Capital, it is essential that you consult with an experienced Ponzi scheme lawyer right away. You may be eligible to recover financial compensation for your damages.

1. GPB and three executives were charged by the SEC with defrauding investors

The SEC alleged that the distribution payments actually came from money put in by new investors. Jeffrey Lash, former managing partner at GPB Capital, also allegedly assisted Gentile in manipulating financial statements of certain limited partnership funds managed by GPB Capital in order to give the appearance that GPB Capital’s income was significant enough to cover distribution payments, when in fact it was not.

The complaint further alleged that GPB Capital and Ascendent Capital made misrepresentations to investors regarding fees and the funds’ true financial condition. GPB Capital also failed to deliver audited financial statements and register two of its funds with the SEC.

The SEC also alleged that GPB Capital violated the whistleblower provisions of the securities laws by, “including language in termination and separation agreements that impeded individuals from coming forward to the SEC, and by retaliating against a known whistleblower.”

“As alleged in our complaint, the defendants told investors that they would be paid distributions from profits of the portfolio companies when, in reality, many of the payments were being made from the investors’ own funds,” stated Richard Best, Director of the SEC’s New York Regional Office. “This action shows our continued pursuit of those who deceive investors and conceal their misconduct to reap profits for themselves.”

2. GPB Capital is Accused of Being a Ponzi Scheme

In a legal complaint filed in the New York Supreme Court, a former business partner of GPB Capital alleges that the investment entity is little more than a “complicated and manipulative” Ponzi scheme.

Among other things, this former associate contends that GPB was only able to pay investors significant returns based on “falsified financial information” and that the investment company had to “implement a different investment methodology” to stay afloat. This is extremely alarming.

If proven true, investors are facing the possibility of serious losses. Since 2013, GPB Capital has reportedly raised nearly $2 billion from investors.

3. Financial Advisors and Brokerage Firms May Be Liable for Losses in GPB Capital

Many financial advisors and brokerage firms encouraged customers to invest in GBP Capital. As was mentioned, Massachusetts regulators are investigating dozens of brokerage firms that offered this private placement investment.

Among many others, broker-dealers that recommended and sold risky GPB Capital funds to investors include, but are not limited to:

Investors who relied on their financial advisor or brokerage firm to perform adequate due diligence may be eligible to recover compensation for losses sustained in GPB Capital.

Jeffrey R. Sonn is a securities fraud attorney. He has more than 30 years of experience fighting for the rights of investors nationwide. If you or your family member sustained significant losses in GPB Capital, you need to speak to a lawyer immediately. For a free initial consultation, please do not hesitate to call (844) 689-5754 or contact the Sonn Law Group today.