GPB and three executives were charged by the SEC with defrauding investors. 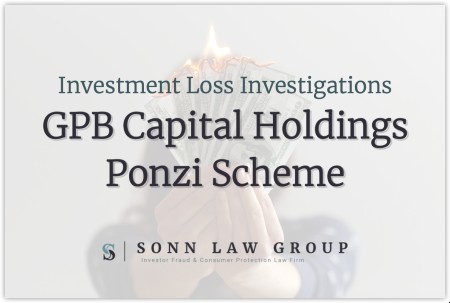 On February 4, 2021, the SEC charged GPB Capital and three of its executives with operating a Ponzi-like scheme that raised over $1.7 billion from investors. GPB Capital was also charged with violating whistleblower protection laws.

The SEC’s complaint alleges that the owner and CEO of GPB Capital, David Gentile, along with the owner of GPB’s placement agent Ascendant Capital, Jeffry Schneider, lied to investors about the source of money that was used to make an 8% annualized distribution payment to their investors. Investors were allegedly told that distribution payments were paid exclusively with money generated by GPB Capital’s portfolio companies.

The SEC alleged that the distribution payments actually came from money put in by new investors. Jeffrey Lash, former managing partner at GPB Capital, also allegedly assisted Gentile in manipulating financial statements of certain limited partnership funds managed by GPB Capital in order to give the appearance that GPB Capital’s income was significant enough to cover distribution payments, when in fact it was not.

The complaint further alleged that GPB Capital and Ascendent Capital made misrepresentations to investors regarding fees and the funds’ true financial condition. GPB Capital also failed to deliver audited financial statements and register two of its funds with the SEC.

The SEC also alleged that GPB Capital violated the whistleblower provisions of the securities laws by, “including language in termination and separation agreements that impeded individuals from coming forward to the SEC, and by retaliating against a known whistleblower.”

“As alleged in our complaint, the defendants told investors that they would be paid distributions from profits of the portfolio companies when, in reality, many of the payments were being made from the investors’ own funds,” stated Richard Best, Director of the SEC’s New York Regional Office.  “This action shows our continued pursuit of those who deceive investors and conceal their misconduct to reap profits for themselves.”