Former Credit Suisse reps claimed breach of contract and implied covenant of good faith and fair dealing, among other things, in their deferred compensation suit. 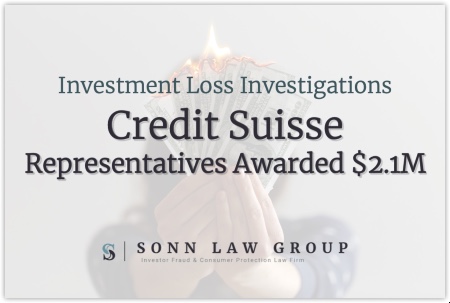 They claimed breaches of contract and implied covenant of good faith and fair dealing, conversion, unjust enrichment, and false and misleading Forms U5. The brokers, all of whom are now registered with UBS Financial, requested in excess of $20 million in damages and costs, as well as expungement of their Forms U5.

Credit Suisse, in its counterclaim, requested that the brokers’ claim be dismissed, $151,201 in compensatory damages plus interests, and a declaration that the brokers were not entitled to vesting or delivery of their unvested contingent deferred awards under the share plan and related documentation.

The FINRA panel awarded the brokers a total of approximately $2.1 million in compensatory damages, costs, and lawyers’ fees. The panel denied the request for expungement of Forms U5.

Since exiting the U.S. wealth management business in 2015, Credit Suisse has been the subject of multiple claims regarding deferred compensation. In 2015, Credit Suisse gave Wells Fargo exclusive rights to hire its brokerage force rather than selling its entire business. This recruiting tactic frustrated some brokers and led to litigation from former brokers claiming that Credit Suisse had wrongfully withheld up to $245 million in back pay from employees.

After Credit Suisse announced to its employees that it was planning to exit the U.S. wealth management business, the approximately 300 registered representatives it had employed were pressed to find other employment or join Wells Fargo. Credit Suisse management allegedly told advisors that they had to decide by December 2015 whether to take Wells Fargo’s offer to join their firm.

They brought in Wells Fargo executives to tout the firm’s platform in October. The bank also allegedly offered up to a 300% signing bonus of an advisor’s revenue, to be paid in a combination of upfront cash and deferred compensation. Wells Fargo even invited the advisors to visit their brokerage offices in St. Louis.

Many advisors made the trip to St. Louis, only to be disappointed upon arrival. They were told that no one would get deferred compensation. Instead, advisors transitioning to Wells Fargo would resign from Credit Suisse, get hired by Wells Fargo, and receive “what we think is going to be a very compelling onboarding award” in cash, said Phillip Vasan, then head of the private bank for Credit Suisse in the U.S.

“And if you do not go to Wells Fargo, that’s not available to you. It’s exclusive in complete alignment with our [advisors] who stay with the program and go to Wells Fargo. Anything else is a voluntary resignation to a third party,” Vasan said during the October town hall.

While Credit Suisse may have expected a seamless transition for their former advisors at Wells Fargo, the opposite occurred. UBS, Morgan Stanley and other brokerages dangled large hiring bonuses to recruit the best advisors. For some advisors, signing bonuses allegedly consisted of the upfront and deferred compensation approaching nearly 400% of their annual revenue.

In the summer of 2015, Credit Suisse completed an internal report in which managers estimated that advisor attrition in the event of a sale could run as high as 22%. In the end, it was much worse. Wells Fargo retained only ⅓ of Credit Suisse’s investors.

Some brokers insisted that although they chose to go to another firm, the choice was not voluntary. They stated they were forced out because of Credit Suisse selling their business. However, Credit Suisse insists that they did not take any steps to sever its employment relationships with the brokers. The reality of what happened could make or break the case for deferred compensation.

Under Credit Suisse’s employment agreements, advisors lose their deferred compensation under certain circumstances, including voluntary resignation or termination with cause. An involuntary termination, however, could theoretically result in back-pay being owed.

“If it had been an acquisition,” Vasan later testified in arbitration, “then everyone would have simply changed what legal entity they were in on a certain date. But because this was a hiring arrangement, it was structured such that the relationship managers [the financial advisors] would voluntarily resign, but specifically to go to Wells Fargo, as opposed to going to some other place.”

From the point of view of the advisors who are suing, Credit Suisse forced advisors’ hands, masking a layoff as a voluntary resignation. And, they claim, the firm has so far avoided paying millions in deferred compensation through obfuscation and delaying tactics.

According to the advisors, Credit Suisse attempted to stifle advisors’ deferred compensation claims by forcing legal complaints into arbitration forums run by a private mediation company they were paying. Eventually, the advisors’ attorneys complained to FINRA. Since then, dozens of FINRA arbitration claims have been filed. FINRA arbitrators have awarded advisors more than $11 million in damages over 5 cases. Credit Suisse continues to fight the claims, insisting arbitrators got it wrong.

The Sonn Law Group is currently investigating allegations that Credit Suisse owes deferred compensation. For a free consultation, please call us now at 866-827-3202 or complete our contact form.