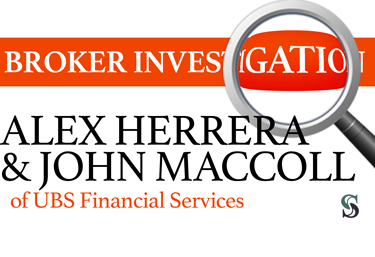 Mr. Herrera, who worked at the Coral Gables, Florida branch office of the firm from 2012 to 2018, was barred after he refused to cooperate with a regulatory investigation into alleged misconduct related to private securities transactions.

Mr. Maccoll, who was employed at the Birmingham, Michigan branch office of UBS Financial Services from 2006 to 2018, was also barred after he refused to cooperate with an investigation into allegations that he used high-pressure sales tactics to persuade UBS customers to invest money in an illegitimate private fund.

According to FINRA, Alex Herrera resigned from his position at UBS Financial Services after the brokerage firm launched an investigation into allegations that he failed to disclose outside business activities and that he failed to seek the required approval for private securities transactions. Notably, in May of 2018, a UBS Financial Services customer filed a complaint alleging losses related to Mr. Herrera’s improper ‘selling away’. That complaint is currently still listed as pending on Brokercheck.

In March of 2018, John Maccoll was terminated by UBS Financial Services after the company’s internal investigation turned up allegations that he misappropriated the funds of more than a dozen different investors. In the last year, Mr. Maccoll has settled at least eight different investor complaints. Several other complaints are still pending.

The Securities and Exchange Commission (SEC) alleges that Mr. Maccoll defrauded at least 15 investors out more than $4 million. The SEC believes that Mr. Maccoll never actually invested any of the money that he solicited from investors. Instead, the SEC believes that this broker simply siphoned off the money for his personal use. Sadly, this is another case of elder financial abuse. The majority of victimized investors in this case were retirees.

At Sonn Law Group, we are dedicated advocates for investors nationwide. If you sustained large investment losses, our legal team can help. For a free consultation, please contact us today.