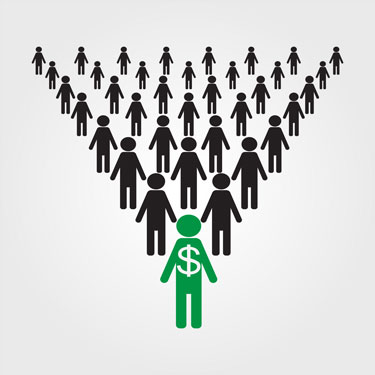 Sadly, hard-working investors lose a tremendous amount of money to illegal pyramid schemes. A pyramid scheme (or pyramid scam) is a relatively common form of financial fraud that seeks to funnel money from a large pool of unsuspecting investors, up to a small number of founders, fraudsters and profiteers.

One of the things that makes pyramid schemes so challenging to deal with is that these scams come in a wide range of different forms. In the modern investing world, pyramid schemes have become increasingly sophisticated. Scammers will frequently use a ‘real’ product or company as bait to attract investment dollars in the pyramid scheme.

At Sonn Law Group, our financial fraud attorneys have the skills and experience needed to handle complex pyramid scheme cases. We also handle Ponzi scheme claims. If you lost money in a pyramid scheme, a Ponzi scheme, or any similar type of financial fraud, you have legal options available. Please do not hesitate to contact a member of our law firm today to arrange a free review of your case.

How Do Pyramid Schemes Work?

The primary characteristic of a pyramid scheme is that the participants (the investors) can only actually make any money by recruiting new members into the scam. In this way, the investors are encouraged to unwittingly help to perpetuate the fraud being committed by the pyramid scheme founders, organizers, managers, and leaders. Yet, in the majority of case, investors in pyramid schemes make little or no money at all. Most lose a huge percentage of the money that they put into the fraud.

All you have to do is keep recruiting more people into the investment scheme and you make money. Of course, in reality, it would be incredibly difficult for anyone to recruit new members into a ‘no product’ pyramid scheme. Only the founding members ever see returns.

For many different reasons, ‘naked’ pyramid schemes have become far less common. One of the primary reasons is that it is simply too difficult to sell people on these cases. Modern pyramid schemes are more complicated, and they almost always involve an underlying product or a service. Indeed, sophisticated scammers will take an otherwise legitimate product and wrap it in a complex pyramid scheme.

An Example of a Typical Pyramid Scheme

In 2013 and in 2014, Vemma took in more than $200 million in revenue. What did the Vemma Nutrition Company offer? Health and wellness drinks. However, instead of focusing on marketing nutrition drinks and supplements to consumers, Vemma focused on soliciting investor money.

Most of Vemma’s revenue came from selling a $600 “business starter pack” and a $150 “monthly subscription” to its investors. What did investors get with that money? The ability to sell Vemma’s wellness drinks and to sell Vemma affiliate memberships to other investors. The nutritional drinks were simply a cover to carry out the pyramid scheme. The scheme perpetrators got rich off of investor money, while investors only got the ability to sell drinks and memberships that no consumers actually wanted.

In the end, the FTC sought an injunction to get Vemma to stop the pyramid scheme. In its official legal complaint, the FTC noted that 99 percent of investors in this pyramid scheme lost money, a truly remarkable figure, but one that is depressingly consistent with other pyramid schemes. Only the fraudsters at the very top of the pyramid ever make any money, and the way they do it is by making misrepresentations to innocent investors, and siphoning off their funds.

How is a Ponzi Scheme Different From a Pyramid Scheme?

Though, there are some key differences between Ponzi schemes and pyramid schemes. With Ponzi schemes, investors are often not fully immersed. Ponzi scheme operators will often tell investors that they are actually making money. In many cases, false account statements will be sent to the investor, showing real and consistent gains. Yet, in reality, the Ponzi schemes operators are merely shuffling money around. New investor money is being used to pay off the original investor. When the money runs out, the victimized investors are stunned to learn that their gains only existed on paper.

Were You a Victim of a Pyramid Scheme? Contact a Financial Fraud Lawyer Today

At Sonn Law Group, our top-rated investment fraud lawyers have extensive experience handling complex pyramid scheme cases. We handle all fraud claims on a contingency fee basis. There are no out-of-pocket costs for you —we only get paid we help you recover financial compensation.