Murphy is facing a four-month suspension and a fine of $5,000 for the misconduct.

The Sonn Law Group is investigating allegations that Thomas Murphy signed subscription agreements without authorization. If you or a family member has suffered losses investing, we want to discuss your case. Please contact us today for a free review of your case. 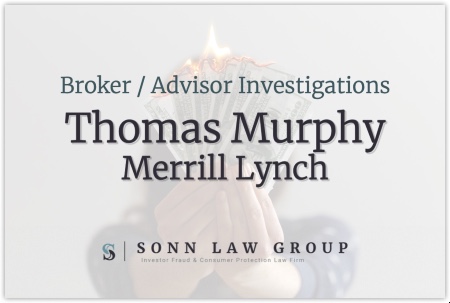 Thomas Murphy (CRD#: 5654189) entered the securities industry in March 2009. He became associated with Merrill Lynch in 2010 and was terminated in March 2018 for “signing subscription agreements with a non-affiliated, third-party investment advisor on behalf of the Firm without authorization, and failing to comply with a direction from management.”

FINRA published findings stating that Murphy executed fifteen subscription agreements as an “authorized signatory” for Merrill Lynch, without the authorization of the Firm, to assist clients of the Firm’s self-directed brokerage business invest in third-party private real estate funds.

According to the findings, in September 2014 while serving as a registered representative in the Firm’s self-directed brokerage business, Murphy was approached by a client who sought his help transferring cash from her existing self-directed Individual Retirement Account (“IRA”) at Merrill Lynch to an account at a third-party fund manager for the purpose of making a qualified investment in a private real estate fund outside of her account. In assisting the client, Murphy signed the fund’s subscription agreement as an “authorized signatory” of Merrill Lynch in its capacity as custodian of the client’s IRA.

In 2017, while a financial advisor in-trading for the Firm’s full-service brokerage business, Murphy  Murphy was approached by the same third-party fund manager to help additional investors use cash held in self-directed IRAs at Merrill Lynch to make qualified investments in private real estate funds outside of their Firm accounts.

Murphy, as part of his efforts to assist these self-directed clients, executed an additional fourteen subscription agreements between August and November 2017 as an “authorized signatory” of Merrill Lynch. Murphy executed seven of the subscription agreements after October 19, 2017, when Merrill Lynch instructed him to cease any involvement with the third-party fund manager. Murphy did not receive any compensation from the third-party fund manager for his actions.

Murphy was not authorized by Merrill Lynch to execute the subscription agreements, and the Firm’s policies prohibited employees, such as Murphy, from executing documents on the Firm’s behalf. Murphy’s conduct created confusion over Merrill Lynch’s role in the investments and whether the transfers from the clients’ IRAs to the private funds would be treated as qualified distributions.

Murphy consented to the imposition of sanctions in the form of a four-month suspension from association with any FINRA member in all capacities and a fine of $5,000.

The Sonn Law Group is currently investigating allegations that Thomas Murphy executed subscription agreements without authorization. We represent investors in claims against negligent brokers and brokerage firms. If you or your loved one experienced investment losses, we are here to help. For a free consultation, please call us now at 866-827-3202 or complete our contact form.