Godin was recently named in a customer dispute that was settled for $50,000.

The Sonn Law Group is investigating allegations that Stuart Godin committed misconduct. If you or a family member has suffered losses investing, we want to discuss your case. Please contact us today for a free review of your case. 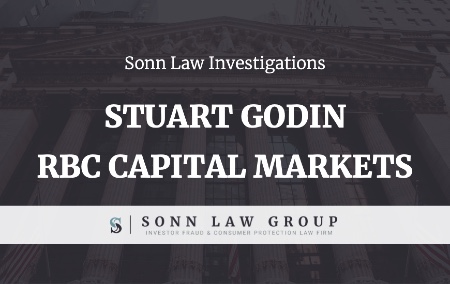 Godin was named in a customer dispute that was eventually settled for $50,000.

In May 2019, a client alleged misrepresentation and incompetence on stock selections from 2018 to 2019. The matter was settled for $9,000. In November 2017, a client alleged losses due to Godin’s unsuitable recommendation to invest in a managed futures fund.

Godin was also the subject of three customer disputes dating back twenty to thirty-five years. In March 1999, a customer alleged violations of law and industry rules in connection with investments he made. The matter was settled for $9,999.

In January 1989, a client alleged that he lost over $12,000 while maintaining an account with Godin’s firm. He alleged violations of federal securities laws, suitability rules, and negligent hiring. The customer was awarded $126,000 in damages.

The Sonn Law Group is currently investigating allegations that Stuart Godin committed misconduct. We represent investors in claims against negligent brokers and brokerage firms. If you or your loved one experienced investment losses, we are here to help. For a free consultation, please call us now at 866-827-3202 or complete our contact form.