Ronald Roach has been accused of having a role in a Ponzi scheme that defrauded investors of about $1 billion.

The Sonn Law Group is investigating allegations that Ronald Roach committed misconduct. If you or a family member has suffered losses investing, we want to discuss your case. Please contact us today for a free review of your case. 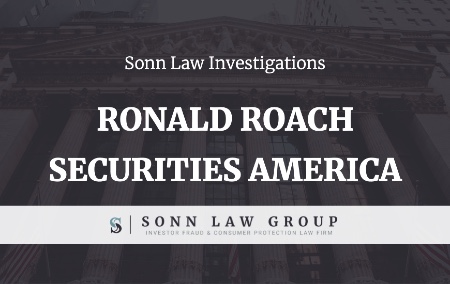 Ronald Roach was barred by the SEC for his role in a Ponzi scheme that defrauded investors of nearly $1 billion. Roach allegedly created fake financial statements to show revenue.

Roach pleaded guilty to the fraud and securities violations stemming from the sale and leaseback of mobile solar electrical generators in October. His sentencing is scheduled for January 28, 2020. The maximum penalty he could face is 10 years in prison.

According to the SEC, Roach was associated with DC Solar, a company that solicited investors by claiming that there were favorable federal tax benefits associated with investments in alternative energy. The company structured transactions in order to maximize the tax benefits to the investors who would purchase the solar generators without taking possession of them. Investors would pay a percentage of the sales price, finance the balance with the company, and then lease the generators back to the company, who would turn around and lease them to third parties.

A portion of the lease revenue would be used to pay the investors’ debts to the company and to the investors. The third-party leases, however, generated little income and the company paid early investors with funds contributed by later investors.

The criminal complaint against Mr. Roach, the allegations stated that he prepared years statements that falsely characterized investments to purchase the solar generators as revenue earned from their rental. He and his co-conspirators, the government said, used those fraudulent financial statements to hide from investors the company’s use of later investor payments to pay financial obligations the company made to earlier investors.

Roach was discharged by Securities America on October 23, 2019.