Conley was indicted on six counts of mail fraud and one count of securities fraud.

The Sonn Law Group is investigating allegations that Phillip Conley defrauded investors. If you or a family member has suffered losses investing, we want to discuss your case. Please contact us today for a free review of your case. 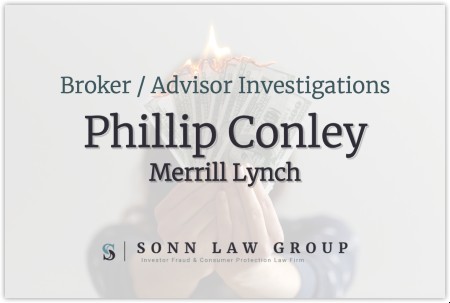 Phillip Conley (CRD#: 4799544) was charged by the SEC with conducting a $5.2 million fraudulent securities offering in April 2020. The complaint alleged that between January 2014 and September 2018, Conley induced investors to purchase securities by making a series of materially false and misleading statements and omissions concerning the legitimacy of the investments and use of investor proceeds.

Additionally, the complaint alleged that Conley failed to invest the proceeds as promised and instead commingled investor funds with his private bank accounts. He then used the majority of the funds to pay for his expensive lifestyle, which included luxury automobiles, private jet charters, extravagant jewelry, and other items. He also allegedly used new investors’ funds to repay older investors in a Ponzi-like fashion.

On August 5, 2020, Conley was indicted by a federal grand jury in the U.S. District Court for the Northern District of West Virginia on six counts of mail fraud and one count of securities fraud. The indictment alleged that between 2014 and 2019, Conley scammed 18 individuals across the United states, including churches, pastors, and even his own adoptive parents.

Conley has six disclosures on his BrokerCheck report.

The Sonn Law Group is currently investigating allegations that Phillip Conley defrauded investors. We represent investors in claims against negligent brokers and brokerage firms. If you or your loved one experienced investment losses, we are here to help. For a free consultation, please call us now at 866-827-3202 or complete our contact form.