Cohn, who previously worked for the SEC, was charged with a number of felonies in 2019 in connection with his employment at GPB Capital.

The Sonn Law Group is investigating allegations surrounding GPB Capital. If you or a family member has suffered losses investing, we want to discuss your case. Please contact us today for a free review of your case. 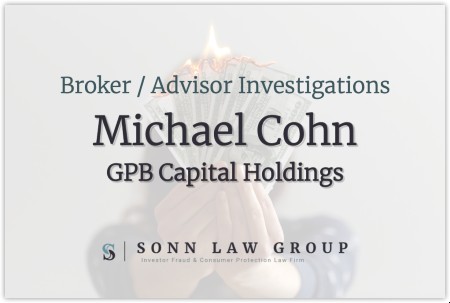 Michael Cohn, former chief compliance officer of GPB Capital Holdings, pled guilty to charges of theft of government property. Cohn was charged in October 2019 with obstruction of justice in relation to an SEC investigation of GPB Capital.

Prior to joining GPB Capital, Cohn was employed by the SEC. It was through this employment that the DOJ alleged Cohn retrieved confidential information, including information relating to an investigation into GPB Capital. Cohn allegedly used this information to get a job with GPB Capital.

The prosecutors initially charged Cohn with obstruction of justice, unauthorized computer access and unauthorized disclosure of confidential information. Over the weekend, the government agreed to drop the felony charges in exchange for a guilty plea from Cohn. In a statement accompanying the guilty plea, Cohn stated that he had “accessed confidential information” from SEC files prior to his job interview with GPB Capital.

A spokeswoman for GPB Capital, Nancy Sterling, stated, “[f]ormer SEC and GPB employee Michael Cohn was with GPB for less than a year and GPB had no involvement with or knowledge of his wrongdoing. GPB terminated Cohn immediately upon learning of the situation.”