The Sonn Law Group is investigating allegations that Charles E. Kenahan committed misconduct. If you or a family member has suffered losses investing, we want to discuss your case. Please contact us today for a free review of your case. 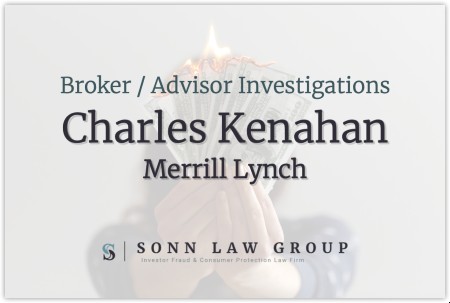 New Hampshire ordered Merrill Lynch to pay $26.25 million in fines and restitution to the former Governor of New Hampshire, a client of Kenahan’s who claimed he suffered investment losses due to his misconduct. Kenahan’s BrokerCheck report has not been updated to reflect the state’s order.

The order imposes the largest monetary sanction in New Hampshire history and FINRA’s second-largest settlement amount in the last decade. Merrill Lynch was also sanctioned for failure to supervise and ordered to maintain compliance undertakings that were put in place to address the compliance failures discovered in their investigation.

“This case is about an abuse of trust committed by Merrill Lynch and Kenahan,” said Jeff Spill, the deputy director and head of enforcement for New Hampshire’s Bureau of Securities Regulation. “Ultimately, Kenahan’s recommendations benefited Kenahan and Merrill Lynch and not the investor.”

Before this claim was filed, Merrill Lynch paid out a $40 million settlement to a former customer of Charles E. Kenahan, Robert Levine, making similar claims. In this settlement, Levine alleged that Mr. Kenahan was making misrepresentations in regards to trades with penny, common and preferred stocks. Merrill Lynch initially denied the allegations but eventually settled prior to the arbitration panel announcing its decision. The $40 million settlement is the largest single payout to an individual claimant in the last decade according to FINRA.

The Sonn Law Group is currently investigating allegations that Charles Kenahan committed misconduct. We represent investors in claims against negligent brokers and brokerage firms. If you or your loved one experienced investment losses, we are here to help. For a free consultation, please call us now at 866-827-3202 or complete our contact form.