Hicks was named in a FINRA complaint for allegedly recommending unsuitable investments to senior clients.

The Sonn Law Group is investigating allegations that Mercer Hicks III recommended unsuitable investments. If you or a family member has suffered losses investing, we want to discuss your case. Please contact us today for a free review of your case. 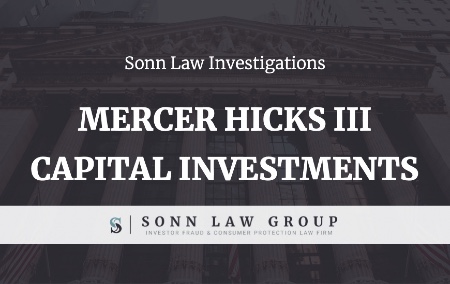 According to the complaint, between June 1, 2014, and July 31, 2017, Hicks allegedly recommended to five senior clients, ranging in age between 73 and 87 years old, to buy speculative non-traded real estate investment trusts and non-traded business development companies.

These investments involved a high degree of risk and were not suitable for investors requiring guaranteed income or immediate liquidity. These types of investments were only appropriate for those who could afford to lose their entire investment. However, according to the clients’ account documents, they sought to preserve or grow their capital, thus making these investments unsuitable for them.

The complaint also alleges that Hicks failed to conduct due diligence on the securities to understand their risks and features. Hicks allegedly earned a 7% commission on the purchases, for a total of approximately $46,500.

According to his BrokerCheck profile, Hicks has been registered with thirteen firms during the course of his career, which began in 1972. In 1997, he was terminated from Robert Thomas Securities over allegations that he failed to follow firm policy. In 2008, Hicks was permitted to resign from Cantella and Co. amid allegations that he had initialed annuity contract forms for a couple. In 2014, Hicks was discharged from Capital Investment Group over allegations that he misrepresented himself as a client to an insurance company.