Mark Hopkins of Grand Blanc Michigan allegedly misappropriated over $1 million from his clients.

The Sonn Law Group is investigating allegations that Mark Hopkins misappropriated client funds. If you or a family member has suffered losses investing, we want to discuss your case. Please contact us today for a free review of your case. 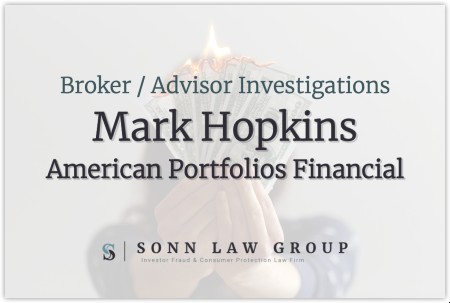 Mark Hopkins (CRD# 2653473)  was registered with American Portfolios Financial Services in Grand Blanc Michigan from 2009 until 2018 when he was permitted to resign following allegations that he accepted customer funds for an investment not in the books for American Portfolios without obtaining pre-approval. Previously, Hopkins was a broker with LPL Financial from 1997 until 2009.

The SEC filed a complaint against Hopkins alleging that beginning in 2017, Mark Hopkins raised at least $1.15 million from at least five customers of the brokerage firm for what he claimed was an investment program at a local credit union. Hopkins allegedly told the customers that investment would return 6% or 7% profit.

Despite these claims by Hopkins, the complaint alleged that the investment program never existed and Hopkins misappropriated the funds to his own account. The complaint also alleged that Hopkins falsified account statements in order to cover up the misconduct.

In 2018, Mark Hopkins’s firm became aware that a check from a pair of customers was sent to the credit union rather than directly to the broker-dealer, the SEC claimed in the complaint. The firm told Hopkins to return the funds to the couple. In August 2018, Hopkins allegedly presented the customers with a fake cashier’s check for $400,000.00, disclosing the firm’s desire that he return the money.

Mark Hopkins told the customers that he recommended they keep the money in the credit union, according to the complaint. Because these investors purportedly trusted Hopkins, they signed a document that falsely stated that Hopkins had returned their money.

Mark Hopkins has six other disclosures on his BrokerCheck profile.

Under FINRA rules, a brokerage firm is responsible for supervising the activity of its brokers and may be subject to liability for their actions. If you suffered losses after investing with Mark Hopkins or American Portfolios Financial Services, you may have a claim. Contact Sonn Law Group today for a free consultation.