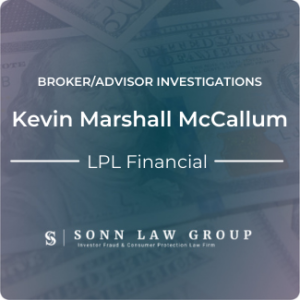 McCallum has nine disclosures on his BrokerCheck report.

Allegations: Customers allege that between 2016 and 2020, representative made concentrated investments in customers’ accounts in a publicly traded BDC and engaged in options trading that were inappropriate for the customers’ investment objectives.

Allegations: Customer alleges that between 2015 and 2019, representative made discretionary investments and concentrated customer’s accounts in Medley Capital Corporation.

Allegations: Customer alleges that between late 2016 and late 2018, representative made discretionary investments and concentrated his account in a non-diversified, closed end management company that was not consistent with his investment objectives.

Allegations: Without admitting or denying the findings, McCallum consented to the sanctions and to the entry of findings that he made unsuitable recommendations to 12 customers, resulting in their overconcentration in a high-risk, publicly-traded business development company (BDC). The findings stated that the BDC that McCallum recommended held first and second lien secured loans, unsecured loans, and equity in small and medium-sized companies in a variety of industries, including construction, banking, telecommunications, pharmaceutical, and oil and gas companies. The risk of loss for investments in this BDC was magnified because it borrowed money. Additionally, the illiquidity of the BDC’s investments presented risk that it would be difficult for the BDC to sell such investments if required, causing it to realize significantly less than the value at which the BDC recorded the investments. Further, the BDC was exposed to interest rate risk that could affect its investment returns. McCallum’s recommendations resulted in the 12 customers concentrating as much as approximately 17% to over 60% in their liquid net worth the BDC. Four of the customers were over the age of 60 and seven of the customers invested retirement funds in the BDC. McCallum’s recommendations generated commissions to his member firm, $14,231.61 of which was paid to McCallum. Four customers sold their positions and realized losses totaling $1,222,092.29. The findings also stated that McCallum sent emails to customers about the BDC that contained unwarranted and exaggerated claims, opinions and forecasts, did not provide a fair and balanced treatment of the risks and benefits of the investment, and contained promissory statements. For example, in a email to a customer, McCallum discussed the customer’s account performance, including the purported benefits of continuing to hold a position in the BDC, but failed to explain the associated risks. McCallum also made statements that were promissory and unwarranted by stating that the stock price of the BDC would increase to 80% to 90% of the net asset value, stating that he did not anticipate further downside in the customer’s portfolio, stating that he was confident that the portfolio would rise back to previous levels and higher, and predicting that the Federal Reserve would raise interest rates three times in the year, which would benefit the BDC. McCallum also included an impermissible projection of the anticipated 12-month dividend cashflow from the BDC.

Allegations: Customer alleges that between August 2019 and October 2019 IAR made unsuitable investment recommendations and concentrated account in Medley Capital Corporation.

Allegations: Customers allege that between October 2017 through December 2018 representative made discretionary investments and concentrated their accounts in a non-diversified, closed end management company that was not consistent with their investment objectives.

Allegations: Customer alleges that between 2011 and 2019, advisor made unauthorized and unsuitable purchases of thinly traded shares of Medley Capital Corporation resulting in more than 50% concentration in the customer’s account.

Allegations: Claimants allege that between 2019 and the present, advisor engaged in fraudulent transactions and risky investments, including the unauthorized use of margin.

Broker Comment: I deny any wrongdoing in the handling of these clients’ accounts and will vigorously defend against these allegations. Specifically, I deny that any of the transactions I recommended were unsuitable given the stated investment objective for the accounts. I also deny that any of the transactions, including the use of margin in the clients’ accounts, was unauthorized.

If you have any information about Kevin Marshall McCallum that you would like to share or discuss, please call our firm for a confidential consultation. We represent investors in claims against negligent brokers and brokerage firms. If you or your loved one experienced investment losses, we are here to help. For a free consultation, please call us now at 866-827-3202 or complete our contact form.