The founder of the alleged fraudulent scheme who was arrested this month is requesting to be released until his criminal trial.

The Sonn Law Group is investigating allegations that Par Funding founders Joseph LaForte and Lisa McElhone committed fraud. If you or a family member has suffered losses investing, we want to discuss your case. Please contact us today for a free review of your case. 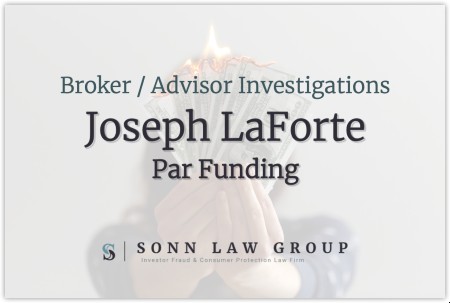 The founder of Par Funding, Joseph LaForte, was arrested on weapons charges after FBI agents searched his Philadelphia home and located seven loaded guns in early August 2020.  Laforte, who is a convicted felon, is prohibited from possessing firearms. Authorities refused to comment on whether the search of LaForte’s home is connected to the ongoing investigation into Par Funding’s alleged fraudulent activities.

LaForte’s attorney has filed court papers seeking to have him released until his criminal trial. Additionally, Par Funding has agreed with the SEC’s demand that a receiver continue to run the Philadelphia lending company until the civil trial alleging fraud on behalf of Par Funding is complete. LaForte and four other defendants dropped their opposition to letting the receiver maintain Par Funding on Thursday. Two defendants have yet to agree. Miami attorney Ryan Stumphauzer, the appointed receiver in the case, has allegedly rehired some Par Funding employees in order to collect loan money owed by hundreds of small businesses.

Earlier this summer, LaForte and Par Funding, in addition to several other defendants, were charged by the  SEC based on allegations that the company offered unregistered, fraudulent securities in order to raise almost half a billion dollars from approximately 1,200 across the United States. The complaint stated that LaForte and McElhone are “in the business” of making opportunistic loans to small businesses, some of which charge more than 400% interest, through their company Par Funding.