Nimmow allegedly sold promissory notes to investors totalling over $3M, without disclosing or receiving approval from his member firm.

The Sonn Law Group is investigating allegations that Jeffrey Nimmow sold Woodbridge promissory notes. If you or a family member has suffered losses investing, we want to discuss your case. Please contact us today for a free review of your case. 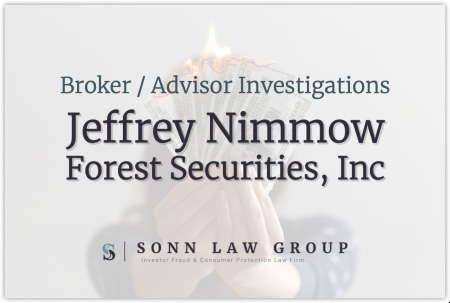 Jeffrey Nimmow (CRD#: 2693601) recently consented to the sanction and to the entry of findings  that he engaged in the sale of promissory notes to investors totaling at least $3,365,000 without disclosing and receiving approval from his member firm. The findings stated that the promissory notes were for a self-advertised real-estate investment fund and were unregistered securities.

Specifically, the findings stated that in 2013, Nimmow became aware of a potential opportunity for clients to loan funds to the Woodbridge Group of Companies, LLC (“Woodbridge”) through an insurance marketing organization that he was involved with. Woodbridge was a self-advertised real estate investment fund.

Nimmow began following Woodbridge, and by March 2015, Nimmow had decided to inquire of his then broker-dealer whether he could sell Woodbridge’s “First Position Commercial Mortgages” (“FPCMs”) to customers. The firm indicated that it was unlikely to approve such a request.

FPCMs included promissory notes (“FPCM Notes”) that were of approximately 12-months in duration and provided a “wholesale” interest rate of 9%. The wholesale interest rate was split between the representative and the customer, and the representative had the discretion to determine who much interest would be paid to the customer and how much would be paid to themselves in the form of up-front commissions.

In August 2015, Nimmow began his employment with Forest Securities, Inc. (“FSI”). In December of that year, Nimmow submitted a request to FSA to add sales of Woodbridge’s FPCMs to his outside business activities (“OBA”). However, Nimmow failed to provide reasonable notice to FSI of his proposed activities, including disclosing certain facts to FSI which suggested that FPCM Notes may be securities.

Nimmow eventually engaged in private securities transactions by selling the FPCM Notes to 18 investors without providing notice of each proposed transaction to FSI, as required by FINRA Rule 3280. Additionally, Nimmow was not qualified and registered to sell promissory notes that were unregistered securities.

Between February 2016 and November 2017, Nimmow sold over $3,000,000 in FPCM Notes to 18 investors. He received approximately $177,937 in commissions for the transactions. Two of the investors were FSI customers at the time they made their investment.

On December 4, 2017, Woodbridge filed a voluntary Chapter 11 bankruptcy petition. Three weeks later, the SEC filed a complaint with the U.S. District Court for the Southern District of Florida against Woodbridge and its former owner, Robert Shapiro, among others, alleging that Shapiro and Woodbridge operated a Ponzi scheme. One year later, the court issued a final judgment, requiring Woodbridge and Shapiro to disgorge their ill-gotten gains, pay a civil penalty, and other imposing other sanctions.

Nimmow was terminated by FSI in March 2018. The allegations against him stated that he made an inaccurate judgment involving Woodbridge promissory notes and mortgages contained in Woodbridge funds. Nimmow allegedly represented Woodbridge to customers through Legacy Financial Network and Retirement Services, Inc., a company Nimmow owned. FSI allegedly provided OBA approval for Nimmow to sell First Position Commercial Mortgages through Legacy Financial, but FSI did not receive any compensation for these actions.

Nimmow is also the subject of two pending customer disputes. The most recent was brought in August of 2018. The allegations state that between February 2017 and August 2017, Nimmow solicited the customer to loan money to Woodbridge. After receiving OBA approval from FSI, Nimmow presented Woodbridge through Legacy Financial to sell First Position Commercial Mortgages. The customer is seeking $150,000.

The former complaint was brought in February of 2018. The customer’s allegations are identical to those in the August 2018 complaint. This customer is seeking $450,000 in damages.

The Sonn Law Group is currently investigating allegations that Jeffrey Nimmow sold Woodbridge promissory notes. We represent investors in claims against negligent brokers and brokerage firms. If you or your loved one experienced investment losses, we are here to help. For a free consultation, please call us now at 866-827-3202 or complete our contact form.