GPB Capital has been the subject of multiple regulatory investigations and an FBI referral, leaving investors clueless as to the fate of their investments.

The Sonn Law Group is investigating allegation against brokers who recommended investments in GPB Capital Holdings. Under FINRA Rules, brokerage firms are liable for their brokers’ misconduct or negligence and investors may be able to their investment through FINRA arbitration. Contact Sonn Law Group today or call us at 866–827–3202 for a free consultation. 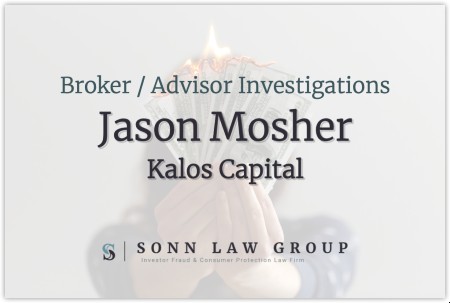 GPB Capital Holdings (GPB Capital) has been the subject of high scrutiny in recent months after the firing of Prime Automotive’s former CEO, David Rosenberg.

This occurred after Rosenberg filed a lawsuit against the company alleging the firm was running a Ponzi scheme.

Rosenberg alleged that GPB Capital inflated dealership values and profits beyond their true amount, and created fake contracts and deals that benefited the heads of the investment fund instead of investors.

Two complaints have already been filed against brokers that pushed the unsuitably risky investments in GPB Capital on retirees and unsophisticated investors. One case was filed on behalf of 91-year-old Florida widow Millicent Barasch, and another was filed by a retired Oregon couple, Grigory and Alexandra Kogan.

Neither complaint names GPB Capital as a defendant, but rather names independent broker-dealers that sold investments in GPB Capital to the plaintiffs. The named brokers include: Madison Avenue Securities of San Diego, Bankers Life Securities of Chicago, and Crystal Bay Securities of Delray Florida.

The complaints allege that GPB Capital offered commissions far higher than the industry standard to brokers for them to push unsuitably risky investments in GPB capital on their clients in violation of FINRA Rules regarding suitability of investments and conflicts of interest.

Under FINRA Rules, broker-dealers “must have a reasonable basis to believe” that a transaction or investment strategy involving securities they recommend is suitable for hte client. This usually means paying attention to a client’s risk tolerance. Additionally, FINRA Rules prohibit brokers form selling certain investments for their own personal gain if those investments are unsuitable.

GPB Capital has been under investigation by state and federal authorities for potential securities law violations. In August, a group of GPB Capital investors filed a class action against the firm for failure to provide accurate and timely financial statements, among other claims.

Brokerage Firms That Sold These Funds

There are as many as 60 brokerage firms that sold these funds and among the largest of those firms are Royal Alliance Associates Inc., Sagepoint Financial Inc., FSC Securities Corp. and Woodbury Financial Services Inc. Brokerage firms are unfortunately all too willing to subject their clients to the risks of investing in securities like GPB due to the hefty fees and commissions these firms earn.

Commissions and fees on GPB reach as high as 11.75% and 7% of that amount goes directly to the recommending broker’s pocket.

Jeffrey R. Sonn is an experienced investor losses attorney. If you suffered losses because a financial professional committed acts in violation of FINRA Rules, Mr. Sonn will protect your rights and interests. Please do not hesitate to contact the Sonn Law Group today for a free review of your claim.