Rudnick is accused of paying unauthorized commissions in the sale of promissory notes. 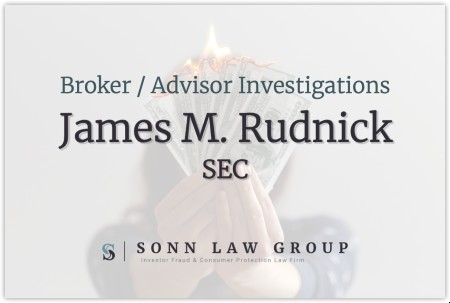 The SEC charged James M. Rudnick, a Florida-based real estate developer, with fraud in connection with the sale of promissory notes of two entities he controlled. According to the press release, the SEC alleged that between 2013 and 2018, Rudnick, through his entities Southeast Lot Acquisitions, LLC and Mary A II, LLC, sold approximately $16.7 million in promissory notes to more than 80 investors.

According to the complaint, Rudnick relied on Dana J. Bradley and Marlin S. Hershey to prepare the offering documents and conduct the offerings. Rudnick allegedly failed to review the offering materials, which stated that no commissions would be paid to employees or unregistered broker-dealers. In fact, Rudnick, Southeast Lot, and Mary A paid Hershey and Bradley approximately $2.1 million in commissions. Hershey and Bradley were both listed as employees and neither were registered as broker-dealers. The Commission previously charged Bradley and Hershey with conducting several other offering frauds and operating as unregistered brokers with respect to those offerings and with respect to Rudnick’s offering.

The SEC’s complaint was filed in the U.S. District Court for the Western District of North Carolina, charging Rudnick with violating the antifraud provisions of Sections 17(a)(2) and (3) of the Securities Act of 1933. Without admitting or denying the SEC’s allegations, Rudnick agreed to be permanently enjoined from violating the charged provisions and to pay an $80,000 civil penalty. The settlement is subject to court approval.

The Sonn Law Group is currently investigating allegations surrounding James Rudnick. We represent investors in claims against negligent brokers and brokerage firms. If you or your loved one experienced investment losses, we are here to help. For a free consultation, please call us now at 866-827-3202 or complete our contact form.