Mastrosimone is facing a $100K customer dispute over the allegations.

The Sonn Law Group is investigating allegations that Frank Mastrosimone made inappropriate recommendations. If you or a family member has suffered losses investing, we want to discuss your case. Please contact us today for a free review of your case. 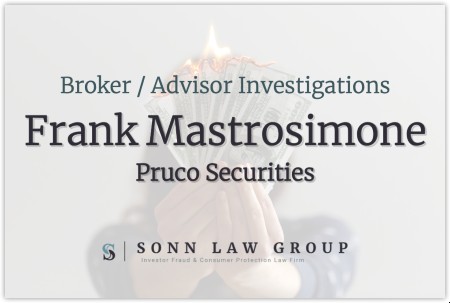 Frank Mastrosimone (CRD#: 322615) is registered as a broker and investment adviser with Pruco Securities, where he has been employed since 2004. Previously, Mastrosimone was a broker with Financial Network Investment Corporation from 1989 until 2004.

Mastrosimone has four disclosures on his BrokerCheck report, one of the disclosures includes criminal charges that were dismissed.

The Sonn Law Group is currently investigating allegations that Frank Mastrosimone recommended an inappropriate private investment. We represent investors in claims against negligent brokers and brokerage firms. If you or your loved one experienced investment losses, we are here to help. For a free consultation, please call us now at 866-827-3202 or complete our contact form.