The complaint is regarding unit investment trusts (UITs) and alleges breach of fiduciary duty, among other violations.

The Sonn Law Group is investigating allegations that E. Kyle Davis committed misconduct. If you or a family member has suffered losses investing, we want to discuss your case. Please contact us today for a free review of your case. 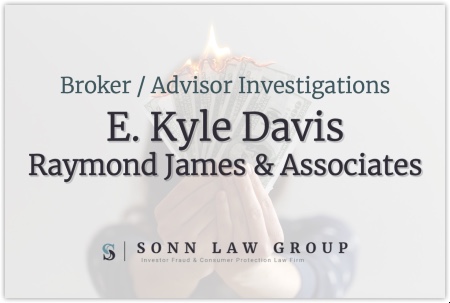 Davis has a total of six disclosures on his BrokerCheck report. That includes two regulatory actions that took place in 2007 and four customer disputes. His first customer dispute was in December 2005. The customer claimed that Davis made unauthorized trades. The matter was settled for $11,386.20.

The second customer dispute was in April 2007. In that dispute, the client alleged that their accounts were not properly grouped to achieve appropriate breakpoints in pricing. The matter was settled for $11,868.64. Davis faced another customer dispute in March 2008. In that dispute, the customer alleged that Davis represented an investment in auction-rate securities as a liquid investment. The firm provided the client with a lending solution, then denied the remainder of the claim.

Davis’s most recent customer dispute was in December 2019. In that dispute, the client alleged breach of fiduciary duty, negligence, negligent supervision, fraud, breach of contract by a third party beneficiary, and violation of Section 10(b) of the Securities Exchange Act. The client alleged that the misconduct occurred through the period of 2012 to 2019, while Davis was employed by Raymond James. The complaint is regarding unit investment trusts (UITs).

Concerning Davis’s regulatory history, in 2007 he was suspended by the NASD for executing securities transactions in customer accounts without customers prior knowledge, authorization, or consent. He was suspended for 10 business days and ordered to pay a fine of $7,500.

Currently, Davis is employed by Ameriprise Financial Services in Atlanta, GA, who he has been with since January 16, 2019.

The Sonn Law Group is currently investigating allegations that E. Kyle Davis committed misconduct. We represent investors in claims against negligent brokers and brokerage firms. If you or your loved one experienced investment losses, we are here to help. For a free consultation, please call us now at 866-827-3202 or complete our contact form.