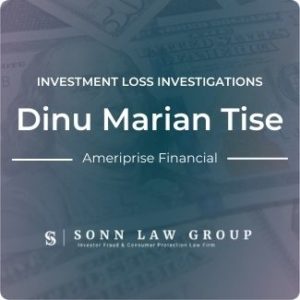 Tise has two disclosures on his BrokerCheck report.

Allegations: Without admitting or denying the findings, Tise consented to the sanctions and to the entry of findings that he acted unethically by circumventing his member firm’s policies and procedures when he caused a senior customer to draft and sign a will bequeathing him a seven-figure sum and by concealing his conduct from his firm. The findings stated that the customer engaged an attorney to draft a will, naming Tise a beneficiary and leaving him at least a six-figure sum. Ultimately, however, the customer never signed a will arising out of these discussions. Later, Tise typed a will for the customer that named him as the primary beneficiary, which would have resulted in a bequest of over $5 million to him. Tise provided the typed will to the customer to use as a guide to write by hand a new will. Two days later, the customer handwrote and signed a will that was nearly identical to the version provided to her by Tise. The customer then took the handwritten will to a competency examination her lawyer had arranged for her. The handwritten will was valid under applicable state law until the customer executed a new will. Later, the customer complained to the firm, had her account assigned to a different registered representative, and signed the new will, which did not name Tise as her beneficiary. Despite being aware of the draft but unsigned will and the signed handwritten will naming Tise as a beneficiary, and contrary to firm policies and procedures, Tise did not disclose to the firm that the customer had named him as a beneficiary and never instructed the customer to remove him from the will. The findings also stated that Tise provided a false compliance attestation that stated he had reported to the firm any potential or actual violations of its policies, despite knowing that being named a beneficiary of the customer’s will was a violation of firm policy. In addition, during an interview with a firm investigator, Tise initially denied that he had typed the will for the customer to copy before he voluntarily corrected that misstatement later the same day.

Allegations: Registered rep was terminated for violating firm policy when he failed to notify his supervisory manager that he was a named beneficiary on his customer’s last will and testament.

The Sonn Law Group is currently investigating allegations surrounding Dinu Marian Tise. We represent investors in claims against negligent brokers and brokerage firms. If you or your loved one experienced investment losses, we are here to help. For a free consultation, please call us now at 866-827-3202 or complete our contact form.