Four former LPL Financial advisors misled hundreds of federal employees into rolling over $40 million from their retirement accounts into higher cost annuities, according to the SEC.

Regulators also charged Federal Employee Benefits Counselors, an Atlanta-area business owned by Laws and Cooke. LPL fired at least three of the advisors, but not until after they had sold variable annuities to about 200 federal employees between March 2012 and November 2014, according to investigators.

SEC OCIE exams to rise despite lower budget
OCIE plans to conduct 1,850 probes of RIAs, a 28% jump over its 2016 total, while sharply cutting those aimed at broker-dealers.

‘BE SKEPTICAL’
The charges emerged the same day as another former LPL advisor accepted a permanent bar after regulators in Massachusetts accused him of fraudulently selling annuities. LPL agreed to settle the case for $3.7 million, and the firm has disclosed more than $100 million in compliance expenses since 2013. 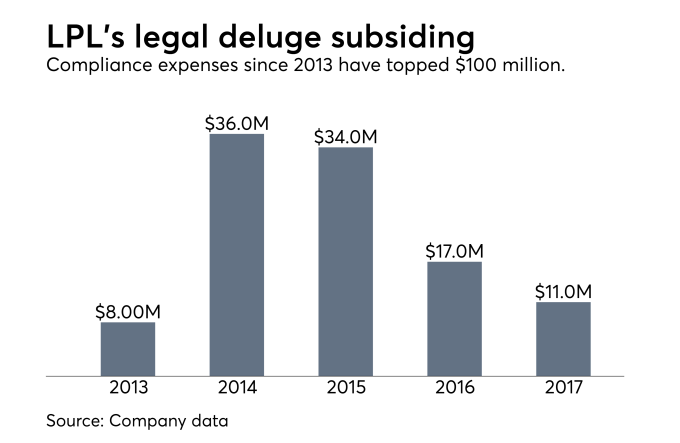 The defendants in the latest case vehemently denied their charges in interviews with CNN. However, investigators said they targeted federal Thrift Savings Plans participants by presenting themselves as employed or approved by the government for TSP counseling. The SEC issued an investor alert Monday.

“Be skeptical if someone offers you an investment opportunity and claims to be affiliated with the federal government,” Lori Schock, director of the SEC’s Office of Investor Education and Advocacy, said in a statement.

Federal Employee Benefits Counselors has not filed any registration documents with the SEC or FINRA. Attorneys for Laws, 49, Cooke, 34, Long, 28, and Hood, 44, didn’t respond to requests for comment, but Laws and Cooke later released statements denying the allegations against FEBC.

A spokesman for LPL said no one was available to discuss the case, with most staff members traveling home after the firm’s annual Focus conference. LPL fired three of the brokers in December 2014, citing concerns with their client communications and conduct, according to FINRA BrokerCheck.

No criminal charges have been filed against the four onetime advisors. A spokesman for the U.S. Attorney’s office for the Northern District of Georgia said the office does not confirm or deny any pending criminal investigations.

BROKERS FIRE BACK
An attorney for Laws told CNN Money that the SEC’s announcement is “shockingly false and misleading” and denied the regulator’s charges. FEBC will “vigorously defend itself,” according to the company’s statement.

“The SEC points to the 200 employees that purchased variable annuities, but fails to mention the hundreds of other employees who were advised to remain in the TSP or move to an IRA account based on their objectives,” Cooke said in prepared comments included in the firm’s statement.

LPL executives called Laws in 2014 to tell him they could only remain in the firm “if we no longer worked with federal employees; otherwise the branch must resign,” Laws added in other comments. “We suspect that the SEC’s motive is to use this case to publicly discourage others in the financial industry from transferring funds away from the TSP,” he said.

Hood — the only one of the quartet with any current individual registration — listed an employer in September 2015 called Agency Counselors, an Atlanta-based RIA. The phone number included in the firm’s latest Form ADV, also dating to that month, led to a wheelchair rental company.

HIGHER FEES, LOWER DISCLOSURE
Laws and Cooke launched FEBC, also known as Keystone Capital Partners, in early 2012. Until December 2014, the business operated out of the same building as one of LPL’s thousands of OSJs, according to investigators. Laws managed LPL’s OSJ in Alpharetta, a northern suburb of Atlanta.

The pair disclosed the outside business to LPL, but they received approval for it only after calling it “a non-securities related entity that sold only fixed or non-variable insurance products,” investigators say. Between March 2012 and November 2014, they sold 200 variable annuities, according to the SEC.

The brokers “were motivated by the prospects of higher commissions” and “intentionally obscured important details when recommending variable annuity purchases,” SEC Atlanta regional associate director Aaron Lipson said in a statement. “They even allegedly excluded the words ‘variable annuity’ from some materials they shared with TSP account holders.”

Participants may opt in to an annuity through TSP, but the brokers portrayed their annuity as providing more liquidity and flexibility, according to investigators. They failed however to disclose its higher annual rider fees and administration fees, or its stringent surrender fee schedule, the SEC says.

The advisors created a form they titled a “TSP-75 Election Form” comprising portions of the official Form TSP-75 and pages from LPL-specific forms for opening accounts, according to investigators. Long never corrected one client who said she couldn’t believe the government offered the product, the SEC says.

FEBC also picked a red, white and blue logo with an eagle in the middle, a design that looks “similar to the federal seal used by several federal agencies,” according to the complaint. The logo remained on the firm’s website Thursday, though a near-identical site with a different firm name had also appeared.

INDUSTRY BAR
The other former LPL broker recently in regulators’ crosshairs, Roger S. Zullo, agreed on Monday to exit the industry after an investigation by FINRA. Zullo accepted a $40,000 fine and a disgorgement of $1.9 million, but authorities waived the refunds due to his financial circumstances.