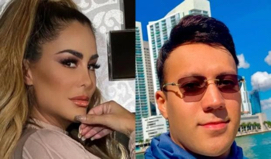 Reports have surfaced that Ninel Conde, Ramos’ wife and a Mexican singer, actress and television host, was in the next room when Larry Ramos Mendoza cut his house arrest GPS monitored ankle shackle, and the shackle alarm sounded. News reports say that Ninel Conde then entered the room where Larry Ramos was and found the court-ordered monitoring shackle lying on the floor. Ramos and Conde married on October 2020. The FBI is now looking for Larry Ramos. A news report repeated rumors claiming that Ramos may have fled on a yacht.

Ramos was scheduled for his criminal trial in the case of United States vs. Larry Ramos, on October 25, 2021 in Miami Federal Court before US District Judge Robert N. Scola. Ramos was indicted on April 23, 2021 on federal charges, including one count of conspiracy to commit wire fraud and five counts of wire fraud. Ramos is facing a maximum of 120 years in jail if convicted.

Law enforcement had been investigating Ramos (and others) for his role in an investment fraud/Ponzi scheme which-according to witnesses and bank records-took place between approximately December 2013 and June 2020. Over the course of this period, Ramos and his partner solicited approximately 235 investors for what they described as an opportunity to earn high returns using a commodities trading algorithm RAMOS had developed. Although his pitch varied slightly over time, Ramos generally told investors that his algorithm would make periodic commodities trades throughout the year, with each trade generating up to a 4% return. The trade would terminate, however, once losses remained at 2% for a certain period of time.

Ramos also claimed that each investor’s money would be held in his or her own TD Ameritrade brokerage account and that the money would not be touched unless a trade was being made. RAMOS also claimed that he and his company, The W Trade Group (“TWT”), would be paid 35% of the profits of each trade. Finally, Ramos claimed that investors could check their TD Ameritrade account statements using a TWT mobile application. Over the course of the scheme, Ramos and his co-conspirators raised over $21 million dollars. However, while TWT did own at least one TD Ameritrade brokerage account, no trades ever occurred. Moreover, the account statements that victims believed they were viewing through the TWT mobile application were entirely fabricated. Instead, approximately $17,455,220 of investor money was used to repay earlier investors; approximately $2,852,245 went to Ramos; and approximately $1,666,506 went to Ramos’s partner. Throughout the course of this scheme, Ramos, as well as the TWT office and bank accounts, were based in Miami, Florida.

Sonn Law Group and Wolfe Law continue to prosecute their case for Alejandra Guzman and investigate others who may have participated in the Ponzi scheme or may have profited from the Ponzi scheme. If you have information about the Ramos/TWT Ponzi scheme or know the whereabouts of Larry Ramos, contact attorney Jeffrey Sonn at 305-912-3000, Jsonn@sonnlaw.com; or attorney Richard Wolfe at 305-384-7370.