Yieldstreet Being Investigated by SEC and FBI

Yieldstreet to be investigated by the FBI and SEC over $90 million in notes that were linked to loans for ship-breaking – the labor-intensive and dangerous business of extracting scrap metal from old ships.

Sonn Law Group has been retained to investigate allegations of wrongdoing at YieldStreet. If you or a family member has suffered losses investing, we want to discuss your case. Please contact us today for a free review of your case. 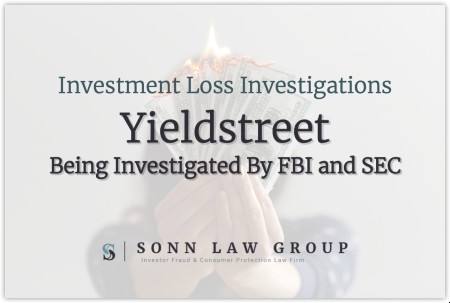 YieldStreet is mainly a short-term, online, crowdfunded lending platform that features shorter-term debt offerings that are secured by commercial or multifamily real estate, art, or marine assets. Most of the loans offered by YieldStreet have terms of three years or less. YieldStreet is only available to accredited investors, meaning they must have a net worth of over $1 million, excluding their primary home, or earn over $200,000 per year.

YieldStreet offers investments such as Real Estate Investment Trusts (REITs), Litigation Finance, Marine Deconstruction, Marine Vessel Acquisitions, Rideshare Fleet Expansions, Vessel Deconstruction, Oil and Gas, among others. YieldStreet’s pitch focuses on the fact that many of their offerings are asset-backed, meaning that there is an actual asset that can be claimed and sold to recover the investment in the event of a default.

Two U.S. agencies are involved in the examination of YieldStreet’s business practices. The SEC is one of the agencies, and they are collecting information on the firm’s business dealings. The FBI is also investigating YieldStreet’s practices and interactions with customers, including how the firm marketed deals to potential investors.

According to sources, the SEC and FBI are looking into the circumstances surrounding $90 million in notes sold by YieldStreet that were linked to loans for ship-breaking – the labor-intensive and dangerous business of extracting scrap metal from old ships. YieldStreet allegedly packaged the loans into notes and sold a series of them beginning in 2018.

In March, YieldStreet allegedly informed its investors that approximately a dozen of the ships used as collateral for the underlying loans had disappeared across international waters. The investors in these notes have not received payment from YieldStreet in the amounts, nor in the time frames originally projected.

Cliff Peek, a 58-year old resident of Sarasota, FL is one of the investors who was affected by YieldStreet’s practices. Mr. Peek stated that he built a portfolio that allowed him to retire at the age of 50. Despite this feat, YieldStreet put a portion of Mr. Peek’s life savings in jeopardy. Mr. Peek stated that he went from making small investments with YieldStreet as an early investor, to investing up to $50,000 once he got comfortable making the investments. He and his wife hold multiple notes backed by the ship-breaking loans that are now in default. Mr. Peek indicated that he has spoken to the FBI about his experiences.

“We believed we were getting diversification by spreading our investment across different loans,” said Mr. Peek. “What was not disclosed to us was they went to the same borrower.”

Crowdfunding sites amassed at least $250 billion for real-estate and private-equity deals by this year, according to an estimate from Ian Ippolito, founder of trade publication the Real Estate Crowdfunding Review. As the pandemic takes its toll on the economy, some of these alternative investments are souring as well. Unlike traditional stocks and bonds, these alternative investments typically lock up investor funds for a long period of time.

YieldStreet recently announced that 14.7% of the money invested into the firm involved loans that ended up in default as of March 2020. YieldStreet stated that its ability to pay investors relies on the borrowers offering the loans, and if the borrowers fail to pay YieldStreet makes no guarantee that investors will receive payment.

Former investors have been exchanging experiences over the last few months, working as amateur detectives in an attempt to locate their money. In April, several of these investors sent a letter to YieldStreet executives, questioning the firm’s due diligence and seeking a full accounting of their investments.

According to court documents, YieldStreet is involved in litigation with the Lakhani family, who are tied to the loans given to companies for vessel-deconstruction, as well as Four Wood Capital Advisors, the firm that originated the loans. Both parties have denied any allegations of wrongdoing.

If you suffered losses investing in YieldStreet, we are here to help. For a free consultation, please call us now at 866-827-3202 or complete our contact form.