The Sonn Law Group is investigating allegations that Triad Advisors  brokers have recommended investments in GPB Capital Holdings or its affiliates without fully disclosing the risk associated with them. If you or a family member has suffered losses investing in GPB Capital Holdings, we want to discuss your case. Please contact us today for a free review of your case. 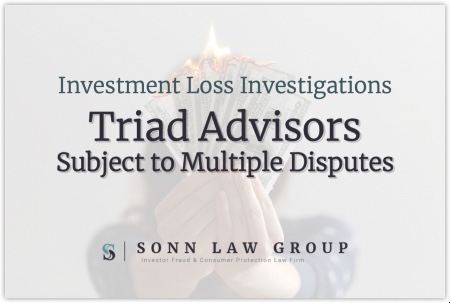 Triad Advisors has been named in customer disputes alleging that brokers recommended investments in GPB Capital Holdings’ private placements. Currently, there are nine investor lawsuits alleging negligence for selling the private investments against brokers of the company. The damages requested are approximately $2.3 million.

In November, Triad’s former parent company, Ladenburg Thalmann Financial, stated that Triad had been named in six customer arbitration complaints seeking a combined total of $1.65 million in damages. Since then, three additional disputes have been filed.

In November 2019, GPB informed investors that they would not be supplying the audited financial reports by their deadline, even though investors have been awaiting the audits since April. In June 2019, GPB Capital Holdings reported losses in the value of two of its investment funds: GPB Holdings II and GPB Automotive Portfolio.