What You Should Know About TD Ameritrade Complaints 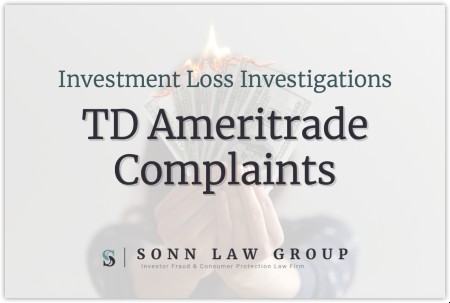 Do you currently have money invested with TD Ameritrade (CRD#: 7870), a broker-dealer operating in all 50 states as well as several U.S. territories, including in Puerto Rico?

If so, it is imperative that you are aware of the recent history of investor complaints and regulatory sanctions that have been brought against this firm.

At the Sonn Law Group, our experienced securities fraud lawyers are currently investigating any and all investor complaints against TD Ameritrade. Here, we detail some of the most notable recent allegations of fraud and negligence by TD Ameritrade and its securities representatives.

Can I Sue My TD Ameritrade Financial Advisor?

The answer is: Yes, you can sue your TD Ameritrade financial advisor. You can file an arbitration claim to seek financial compensation when an advisor – or the brokerage firm they work for – fails to abide by FINRA’s rules and regulations and you suffer investment losses as a result.

In 2016, the Securities Exchange Commission (SEC) filed a lawsuit against Aequitas Capital, an Oregon-based wealth management firm, on the grounds that the company was operating a $350 million Ponzi scheme.

According to the complaint filed by the agency, top executives at Aequitas Capital told clients that their money was being used solely for investment purposes, when in reality, investor money was being diverted by management. Specifically, it was being siphoned off to pay their lucrative salaries and shuffled around to keep the company afloat.

TD Ameritrade is one of several banks and brokerage firms that have been accused of playing a role in facilitating the Aequitas Capital’s fraud scheme. Investors allege that TD Ameritrade’s brokers recommended that they put their money into certain complex financial products that were being offered by Aequitas Capital Management.

These investors were assured that TD Ameritrade brokers had conducted proper due diligence on the financial products being offered by Aequitas Capital, and that the products were safe. Unfortunately, this was false.

The claim against TD Ameritrade and other brokerage firms is now moving forward in the legal process. In May of 2017, an Oregon judge ruled that an investor-led lawsuit would be able to continue.

Brokerage firms have a legal duty to represent their client’s interests with adequate attention and requisite professional skill.

In 2016, a Southern California client accused the brokerage firm of breaching this basic duty. A Los Angeles, California-based FINRA arbitration panel agreed, awarding this investor $135,100.29 in compensation on the grounds that TD Ameritrade was negligent.

Negligence and Failure to Supervise

In June of 2016, a North Carolina client sought FINRA arbitration against TD Ameritrade. The investor asserted several different causes of action, including:

Upon consideration, the arbitration panel found that TD Ameritrade owed the victims $550,500 in compensatory damages along with an additional $500,000 in punitive damages.

Punitive damages are meant to punish the grossly negligent actions of the defendant; these damages are not tied directly to any specific investor ‘loss’. While only awarded in limited circumstances, FINRA arbitration panels can grant punitive damages if the broker or broker-dealer’s conduct is deemed to be intentionally malicious or exceptionally reckless.

In October 2014, a FINRA arbitration panel based in New York, NY ruled against TD Ameritrade upon finding that the brokerage firm’s misconduct was responsible for an investor’s losses. The causes of actions asserted before the arbitration panel included:

This claim stemmed from a risky bio-pharmaceuticals stock that TD Ameritrade was offering to certain investors. In all, the TD Ameritrade investor was awarded $605,000 in damages from the brokerage firm.

In August 2011, TD Ameritrade was publicly censured and fined $2,650,000.00 by FINRA’s Department of Enforcement. Pursuant to industry regulations and NASDAQ membership rules, TD Ameritrade, like all registered brokerage firms, has an obligation to deliver a full product description or summary prospectus to all customers who purchase shares of exchange traded funds (ETFs), at the time of the sale.

Yet, between January 2009 and September of 2010, investigators determined that TD Ameritrade failed to provide ETF purchasers with an adequate product description for more than 4.8 million separate transactions. To make wise investment decisions, investors need to be fully informed as to key details of any financial product.

TD Ameritrade’s failure to provide ETF buyers with an investment prospectus or full product description put investors at risk and undermined the integrity of the market. Full details regarding this action can be found by referencing the case number: 2010022922702.

Misled Customers About the Risks of a Mutual Fund

In February of 2011, TD Ameritrade reached a large settlement with the Securities and Exchange Commission (SEC), agreeing to reimburse $10 million to affected customers.

In reality, none of those three things were true. The Reserve Yield Plus fund was a money market fund that was designed to always maintain its principal investment; however, it was not guaranteed to do so. This is a critically important distinction.

There were risks associated with this investment that were simply not shared with actual and prospective customers. When Lehman Brothers collapsed in September of 2008, the Reserve Yield Plus fund sustained losses that investors were promised were impossible.

Did You Lose Money Investing With TD Ameritrade?

Let us assist you. At Sonn Law Group, our top-rated securities fraud attorneys are proud to be fierce advocates for investors. If you lost money due the negligence of TD Ameritrade or any TD Ameritrade representatives, please contact us today at (877) 872-5272. We will fight for your legal rights and financial interests. Initial case evaluations are always free of charge, and we will not collect our legal fee unless we help you recover compensation.