The SEC also claims that TCFG breached its fiduciary duty to its advisory clients. 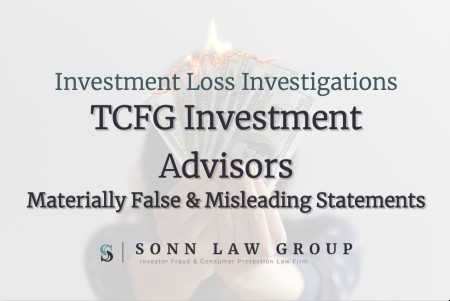 According to the complaint, TCFG and Roberts breached their fiduciary duty to advisory clients from June 2014 until April 2020 by disclosing that TCFG Wealth “may” receive portions of the fees charged to TCFG accounts by its unaffiliated clearing and custody firm when, in fact, Roberts had directed that firm to charge TCFG clients significant markup fees that were paid to TCFG Wealth. While TCFG and Roberts did disclose the existence of the markups eventually, they continued to mislead TCFG clients by claiming that the markup was only imposed “in some limited circumstances.” Despite this assertion, the SEC claims that TCFG and Roberts either knew, or were reckless and negligent for not knowing, that the charges were marked up approximately 60% of the time.

Additionally, the SEC alleges that TCFG failed to implement written policies and procedures reasonably designed to prevent the sorts of disclosure and conflict of interest violations that arose from these practices, and Roberts used TCFG Wealth in order to aid and abet the violations.

The Sonn Law Group is currently investigating allegations surrounding TCFG Investment Advisors, LLC. We represent investors in claims against negligent brokers and brokerage firms. If you or your loved one experienced investment losses, we are here to help. For a free consultation, please call us now at 866-827-3202 or complete our contact form.