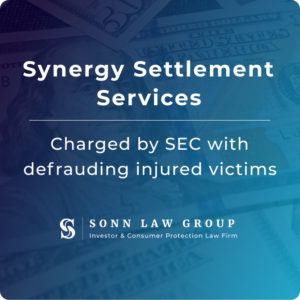 Sonn Law Group is investigating the SEC’s claims that two principals of Synergy Settlement Services defrauded personal injury victims. The SEC accuses that Lazarus and Prieto formed a non-profit called Foundation for Those with Special Needs, Inc., and then represented to individuals with disabilities that “the individuals were placing their funds in a pooled trust managed by a non-profit association…[but that] the defendants instead used [the] non-profit trustee as a shell company to profit from disabled personal injury victims.”

The complaint goes on to state that “The defendants, however, concealed from the beneficiaries, the Internal Revenue Service, and the Social Security Administration that they diverted at least $775,000 in trustee and joinder fees directly from the beneficiaries’ accounts to their for-profit business, Synergy.”

Further the complain claims that Synergy and its executives treated themselves and clients to golf tournaments and beach parties using the fraudulent non-profit organization which betrayed the trust of their victims.

In a parallel move, the SEC also charged registered brokerage firm True Link Financial Advisors, LLC, and its CEO, Kai H. Stinchcombe in their role as investment and asset manager for the pooled trusts.

If you have information about Synergy Settlement Services, we want to hear from you. Please contact our law firm using the form below.

Have information about the accused Synergy Settlement Services fraud?
Submit the form below to share what you know with our team.