INVESTORS: The SEC filed charges against multiple individuals for promoting investments in a $450M Ponzi scheme. 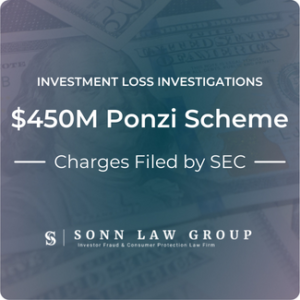 After filing their initial complaint, the SEC obtained a temporary restraining order  and asset freeze against the defendants named in that  complaint. On April 21, 2022, the SEC obtained preliminary injunctions against the defendants and a continuation of the asset freeze for the duration of the SEC’s case. On June 3, 2022, the court appointed a receiver to, amongst other things, marshal and take control over the assets of the defendants named in the initial complaint for the benefit of investors.

The amended SEC complaint charges the eight additional defendants , Jeffery, Jenne, Johnson, Christopher Madsen, Richard Madsen, Murphy, Rohner, and Rosegreen, with violating the broker registration provisions of Section 15(a)(1) of the Securities Exchange Act of 1934 and the registration provisions of Sections 5(a) and 5(c) of the Securities Act of 1933. The SEC seeks permanent injunctions, conduct-based injunctions, disgorgement with prejudgment interest, and civil penalties against all of the additional defendants.

If you have any information about anyone named in this lawsuit that you would like to share or discuss, please call our firm for a confidential consultation. We represent investors in claims against negligent brokers and brokerage firms. If you or your loved one experienced investment losses, we are here to help. For a free consultation, please call us now at 866-827-3202 or complete our contact form.