INVESTORS: Martin A. Sumichrast was charged by the SEC with defrauding a company he managed, Stone Street Partners, LLC, and its investors. 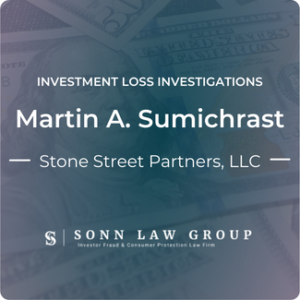 On May 31, 2022, the SEC announced that it filed charges against North Carolina resident Martin A. Sumichrast for defrauding Stone Street Partners, LLC, a private fund that he managed, and its investors by misappropriating fund assets and by engaging in several unauthorized transactions designed to benefit himself at Stone Street’s expense.

According to the SEC’s complaint, Sumichrast became Stone Street’s sole manager following the death of the fund’s co-manager in December 2016. Shortly after, he started using his position to engage in undisclosed conflict-of-interest transactions that advanced his personal interests over those of Stone Street and its investors. In particular, Sumichrast allegedly misappropriated $300,000 from Stone Street by impermissibly doubling his annual salary between 2017 and 2019. Sumichrast reportedly engaged in a series of self-dealing transactions with entities in which he personally had an interest, including several transactions with cbdMD, Inc., a now publicly traded company of which Sumichrast is CEO and Chairman of the Board of Directors. Finally, the complaint alleges that Sumichrast failed to disclose to, or obtain consent from, Stone Street or its investors prior to engaging in any of these conflict-of-interest transactions.

If you have any information about Martin A. Sumichrast that you would like to share or discuss, please call our firm for a confidential consultation. We represent investors in claims against negligent brokers and brokerage firms. If you or your loved one experienced investment losses, we are here to help. For a free consultation, please call us now at 866-827-3202 or complete our contact form.