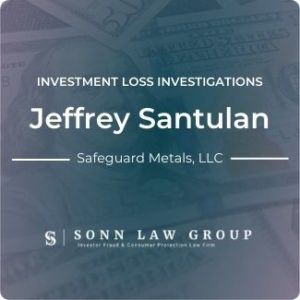 The SEC issued a litigation release on February 2, 2022 announcing charges against Safeguard Metals, LLC and its owner, Jeffrey Santulan. The SEC’s complaint alleged that between January 2017 and July 2021, Safeguard and Santulan acted as investment advisers and convinced investors to sell their existing securities, transfer the proceeds of hte sale into a self-directed Individual Retirement Account, and invest the proceeds into gold and silver coins. Safeguard and Santulan reportedly used false and misleading statements about the safety and liquidity of the investments, Safeguard’s business practices, and its compensation structure.

Additionally, Safeguard allegedly marketed itself as a full-service investment firm with offices in London, New York City, and Beverly Hills that employed prominent individuals in the securities industry and had $11 billion in assets under management. In reality, Santulan allegedly operated the company from a small leased space in a Woodland Hills, Calif. office building using sales agents. The agents reportedly used prepared scripts, some that were written by Santulan, that contained false and misleading statements about how the market was going to crash and their retirement accounts would be frozen under a new ‘unpublicized’ law.

The SEC also alleged that Safeguard and Santulan represented 4% to 33% markups, but actually charged average markups of approximately 64% on its sale of silver coins. Safeguard obtained approximately $67 million from the sale of coins to more than 450 mostly elderly, retail investors, and kept approximately $25.5 million in mark ups.

The complaint charged Safeguard and Santulan with violations of the antifraud provisions of Section 10(b) of the Securities Exchange Act of 1934 and Rule 10b-5 thereunder, and Sections 206(1) and 206(2) of the Investment Advisers Act of 1940. Additionally, it charged Santulan with aiding and abetting Safeguard’s violations and as a control person within the meaning of Section 20(a) of the Securities Exchange Act of 1934. The SEC is seeking permanent injunctions, disgorgement of allegedly ill-gotten gains, plus prejudgment interest, and civil penalties.

The Sonn Law Group is currently investigating allegations surrounding Safeguard Metals, LLC and Jeffrey Santulan. We represent investors in claims against negligent brokers and brokerage firms. If you or your loved one experienced investment losses, we are here to help. For a free consultation, please call us now at 866-827-3202 or complete our contact form.