Sonn Law is investigating claims of brokers who were denied deferred compensation by Morgan Stanley. 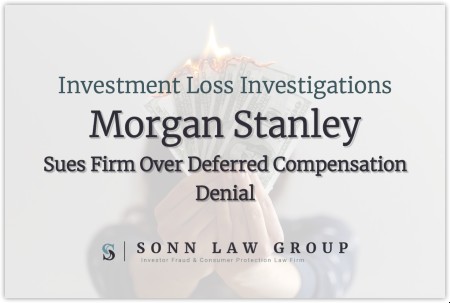 Morgan Stanley automatically defers between 1.5% and 15% of its more than 15,000 brokers’ annual payout, according to an excerpt of its 2018 compensation plan included in Shaffer’s complaint. The firm allocates 75% of brokers’ deferred compensation to cash, which vests in six years and 25% company stock vesting in four years. Brokers who leave due to a disability or layoff, or to join the government or to retire are allowed to retain their deferred compensation.

“Brokers with larger claims are better off filing individual suits against Morgan Stanley,” said Jeffrey Sonn of Sonn Law. Following the settlement in the Wells Fargo case, class members received only about 28% of their respective deferred compensation.

The Sonn Law Group is currently investigating allegations that Morgan Stanley failed to pay financial advisors their earned deferred compensation. For a free consultation, please call us now at 866-827-3202 or complete our contact form.