The award related to the sale of Puerto Rico bonds.

The Sonn Law Group is investigating allegations that Merrill Lynch committed misconduct. If you or a family member has suffered losses investing, we want to discuss your case. Please contact us today for a free review of your case. 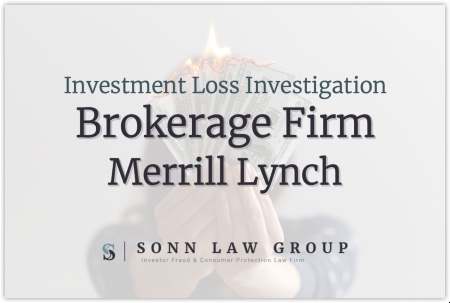 Merrill Lynch was ordered by FINRA arbitrators to pay approximately $2 million in a customer dispute regarding the sale of Puerto Rico Bonds. The Puerto Rico bond market collapsed in 2013.

In 2017, Angel and Windy Pagan filed a FINRA arbitration claim against Merrill Lynch alleging gross negligence, breach of fiduciary duty, breach of contract, violations of Puerto Rico and state securities laws, and other infractions in connection with their investments in Puerto Rico municipal bonds and closed-end bond funds. Pagan retired from Major League Baseball in 2016.

Merrill Lynch sought denial of the claim but FINRA refused, instead of ordering Merrill Lynch to pay the Pagans approximately $1.7 million in compensatory damages, 4.5% annual interest on that amount from June 20, 2017, $88,760 in costs, and $750 for the Pagans’ FINRA filing fee.

Merrill Lynch also sought expungement of any record of the arbitration from the record of Alex Gierbolini, who has been registered with Merrill Lynch since 2012.

Gierbolini has accumulated 24 customer disputes during his 22-year career in the financial industry. All but two of the disputes have been filed since 2014, with several of them specifically referring to the sale of Puerto Rico bonds and closed-end funds. Six claims remain pending, while the rest of the claims filed since 2014 have been settled for amounts ranging from $22,000 to $1.1 million, according to BrokerCheck.

Morgan Stanley and UBS have also been ordered by FINRA to pay millions of dollars in claims involving Puerto Rico bonds.

The Sonn Law Group is currently investigating allegations that Merrill Lynch sold Puerto Rico bonds. We represent investors in claims against negligent brokers and brokerage firms. If you or your loved one experienced investment losses, we are here to help. For a free consultation, please call us now at 866-827-3202 or complete our contact form.