Mediatrix Capital was named as a defendant in September 18, 2019 SEC complaint alleging that it is a fraudulent international trading program with $125M of investor money at stake. 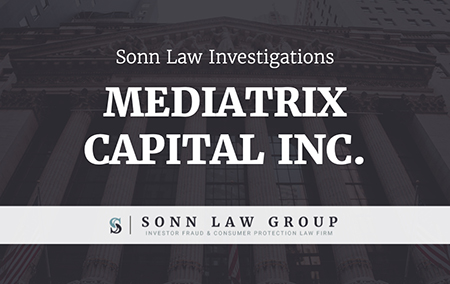 We have substantial experience in representing investors who have sustained losses due to the negligence or misconduct of their broker and/or brokerage firm.

If you’ve suffered investment losses in Mexiatrix Capital, we want to hear about it, as there may be options for recovery.

If you have information about Mediatrix Capital Fund, please submit the short form below and we will follow up with you soon to discuss possible next steps.

Did you lose money investing in Mediatrix Capital Fund?

If you suffered losses investing in Mediatrix Capital Fund we may be able to help you recover. Call us now at 844-689-5754 or complete the form below.

Key Facts of the SEC Complaint Against Mediatrix Capital Fund

[Click here to read the SEC complaint in its entirety]

If a financial advisor or brokerage firm made an unsuitable investment recommendation or promoted a fraudulent investment scheme, they may potentially be liable for an investor’s losses.

Sonn Law Group has a great deal of experience in representing investors who have sustained losses due to the negligence or misconduct of their broker and/or brokerage firm, including cases involving Ponzi schemes. If you are looking for an investment fraud attorney to review your rights and options, the lawyers at Sonn Law Group represent individual and institutional investors who have lost money as a result of unsuitable investment advice, negligent advice, investment fraud or stockbroker misconduct. Our attorneys have helped to recover more than $250 million in assets lost to investment fraud, securities fraud, Ponzi schemes, and stockbroker misconduct.