INVESTORS: The SEC filed an emergency action to shut down a multi-million dollar Ponzi scheme operated by Marco “Sully” Perez 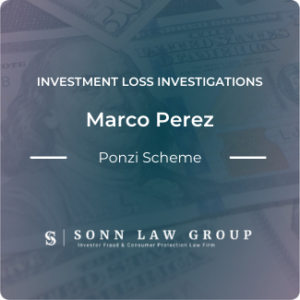 On December 14, 2021, the SEC filed an emergency action to shut down a multi-million dollar Ponzi scheme being perpetrated by Marco “Sully” Perez targeting retirement funds held by veterans and other investors. The SEC also charged Permian Basin Proppants, Inc., a Texas company that Perez controls as president and used to carry out the scheme. The U.S. District Court for the Western District of Texas issued a temporary restraining order halting the ongoing offering, freezing the defendants’ assets, and granting other emergency relief.

The SEC’s complaint alleges that Perez offered investments in Permian, which he represented as buying sand for use in oil and gas drilling. He allegedly told investors that Permian would use the funds to buy sand, which would then be sold to drillers at a price markup. Perez reportedly told investors that they would generate guaranteed returns ranging from 10% to 100% in as little as 30 days. Perez is accused of touting his veteran status as part of his investment pitch to gain further trust from prospective investors. The SEC’s complaint alleges that Perez used these tactics to raise at least $9.25 million from approximately 265 investors.

Despite what Perez told investors, Permian used very little, if any, investor funds for acquiring sand and did not have the agreements to sell sand to drillers as it represented. Instead, the SEC alleges that Perez used investor funds to make Ponzi payments and to pay personal expenses, including exotic cars, private-jet travel, jewelry, gambling, and his wedding aboard the Queen Mary. Perez also allegedly provided investors with falsified account statements to show phony sand transactions and non-existent returns.

The SEC charged Perez and Permian with violating the antifraud and securities registration provisions of Sections 5(a), 5(c), and 17(a) of the Securities Act of 1933 and Section 10(b) of the Securities Exchange Act of 1934, and Rule 10b-5 thereunder. The complaint seeks permanent injunctions, civil penalties, and disgorgement of ill-gotten gains, with prejudgment interest, against Perez and Permian.

The Sonn Law Group is currently investigating allegations surrounding Marco “Sully” Perez. We represent investors in claims against negligent brokers and brokerage firms. If you or your loved one experienced investment losses, we are here to help. For a free consultation, please call us now at 866-827-3202 or complete our contact form.