Did You Lose Money in GPB Capital Through Your Kalos Capital Broker?

Several Kalos Capital brokers have been hit with arbitration claims over unsuitable investments in GPB Capital Funds. If you’ve lost money in GPB Capital, we can help you recover.

The Sonn Law Group is investigating allegations into brokers who recommended GPB Capital. If you or a family member experienced losses investing with GPB Capital, we want to discuss your case. Please contact us today for a free review of your case.

You may be able to recover losses by filing a FINRA arbitration claim. Call Sonn Law Group now at 305-912-3000 or complete the form below. 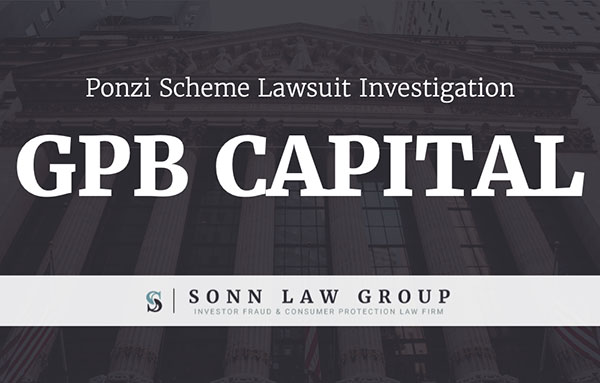 GPB Capital Holdings is a New York-based investment firm that offers unregistered and high-risk private-placement securities through a number of individual limited partnerships.

In a lawsuit filed against the firm, it is alleged that GPB Capital was an elaborate Ponzi scheme. In addition, the lawsuit claims that several of GPB Capital’s controllers engaged in overbilling, made significant personal expenses to the company, and misreported the actual purchase price of the dealerships the firm purchased for its funds.

Several other organizations, including the Securities and Exchange Commission (SEC), the Financial Industry Regulatory Authority (FINRA), and the Massachusetts Secretary of the Commonwealth are conducting investigations into GPB Capital. The FBI also reportedly made an unannounced visit to GPB Capital’s offices in February 2019.

Two complaints have already been filed against brokers that pushed the unsuitably risky investments in GPB Capital on retirees and unsophisticated investors. One case was filed on behalf of 91-year-old Florida widow Millicent Barasch, and another was filed by a retired Oregon couple, Grigory and Alexandra Kogan. Neither complaint names GPB Capital as a defendant, but rather names independent broker-dealers that sold investments in GPB Capital to the plaintiffs. The named brokers include: Madison Avenue Securities of San Diego, Bankers Life Securities of Chicago, and Crystal Bay Securities of Delray Florida.

The complaints allege that GPB Capital offered commissions far higher than the industry standard to brokers for them to push unsuitably risky investments in GPB capital on their clients in violation of FINRA Rules regarding suitability of investments and conflicts of interest.

Specific allegations against Kalos brokers are as follows:

Under FINRA Rules, broker-dealers “must have a reasonable basis to believe” that a transaction or investment strategy involving securities they recommend is suitable for the client. This usually means paying attention to a client’s risk tolerance. Additionally, FINRA Rules prohibit brokers form selling certain investments for their own personal gain if those investments are unsuitable.

The Sonn Law Group is currently investigating GPB Capital Holdings. We represent investors in claims against negligent brokers and brokerage firms. If you or your loved one experienced investment losses, we are here to help. For a free consultation, please call us now 305-912-3000 at complete our contact form.