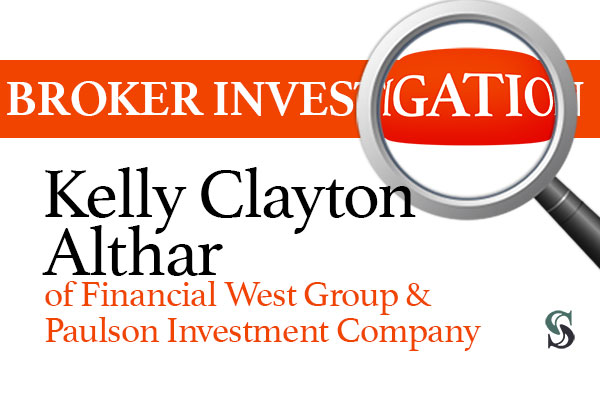 The Sonn Law Group is investigating claims related to broker Kelly Clayton Althar (FINRA CRD#: 2666723) who was recently named a respondent in a FINRA complaint.

The complaint states that Althar made unsuitable recommendations and engaged in excessive trading in two accounts held by an elderly customer. The elderly customer’s accounts were ultimately decimated.

According to his profile on BrokerCheck, in 2003 Kelly Althar was charged with one count of felony grand theft. In 2008 Kelly Althar filed for bankruptcy. In 2014 Althar was the subject of two customer complaints.

Did you suffer damages while working with Kelly Clayton Althar, a former broker who was employed by Financial West Group & Paulson Investment Company? If you invested money through Mr. Althar and suffered a loss, you may be eligible to file a claim for compensation. Contact Sonn Law Group today.

Here are the complete details of the most recent FINRA complaint against Kelly Clayton Althar on its website:

Althar was named a respondent in a FINRA complaint alleging that he made unsuitable recommendations and engaged in excessive trading in two accounts held by an elderly customer. The complaint alleges that Althar engaged in high volume trading to generate commissions and over concentrated the customer’s accounts in risky securities, despite the fact that the customer was close to retirement and wanted only low risk investments. Althar’s trading decimated the customer’s accounts, which constituted the bulk of her net worth and retirement savings.

If you’re a former client of Kelly Clayton Althar and you’ve suffered losses, contact us today for a free case review.