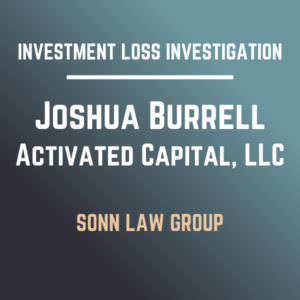 INVESTORS: The SEC has alleged that New York Fund Manager Joshua Burrell, principal at Activated Capital, LLC, has been operating a $6.3 million fraudulent scheme, involving soliciting investment in Opportunity Zones, a community development program established by the Tax Cuts and Jobs Acts of 2017

If you were solicited to invest in Opportunity Zones by Joshua Burrell or any other representative of Activated Capital, LLC we want to hear from you. We are committed to gathering the facts and helping you recover as much of your investment as possible.

If you’ve invested with Joshua Burrell and his company Activated Capital, LLC, call the Sonn Law Group anytime at 844-689-5754 or complete the intake form below to speak with a legal professional from our firm about your options for recovery.

Worried about your investments with Joshua Burrell (Activated Capital, LLC)?
Submit the short form below to schedule a free consultation.

What are the Specific Allegations Made Against Joshua Burrell in the SEC Complaint?

Below is the text from the SEC’s complaint regarding Joshua Burrell (Activated Capital, LLC):

1. This action concerns fraudulent conduct Burrell carried out through Activated that defrauded at least fourteen investors who invested at least $6.3 million in Activated’s private real estate funds (the “Funds”). Approximately $6.1 million of this amount was invested by twelve investors in the Activated Capital Opportunity Zone Fund II, LLC (“Fund II”).

2. In approximately January 2019, Burrell began marketing investments in the Funds to investors. Defendants made a number of material misrepresentations concerning the Funds and specifically Fund II. First, Fund II’s operating agreement stated that Fund II would purchase properties in the name of the Funds for investment purposes. Instead, however, in many instances, Burrell, through Activated, misappropriated investor funds by purchasing the properties in the names of other Activated entities that Fund II did not own.

Instead, the Defendants engaged in Ponzi-like conduct, making distributions to investors that were funded, in part, with investors’ money.

4. Third, marketing materials and operating documents falsely represented that Fund II would have an outside custodian and that Activated’s principals had made significant investments in Fund II. In fact, Fund II had no outside custodian, and Activated’s principals had not made significant investments in Fund II.

5. Finally, Defendants falsely represented to at least one investor that Fund II had “just under” $20M in assets under management. In fact, at the time, the fund had raised less than $6 million from investors.

6. In addition, Burrell misappropriated approximately $100,000 of investor funds, most of which were categorized as “property improvement” expenses.