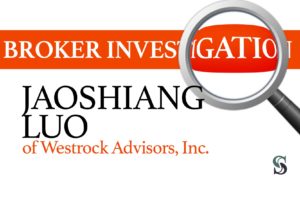 According to a recent FINRA complaint, Jaoshiang Luo, who worked for Westrock Advisors, Inc., among other firms, appealed a decision recorded on October 28, 2014. The decision in 2014 barred Luo permanently from FINRA related activities. The Panel’s decision resulted from Luo’s material misrepresentations and omissions in connection with the sale of promissory notes issued by his member firm’s parent company. His acts were a violation of the Securities Exchange Act of 1934, Section 10(b), Exchange Act Rule 10b-5, and FINRA Rules 2020 and 2010.

The Hearing Panel imposed an additional bar on Luo based on his recommendation of notes without a reasonable basis for believing they were suitable for any investor. In addition, he recommended notes to customers for whom they were not suitable. This was a violation of NASD Rule 2310 and FINRA Rule 2010.

The Hearing Panel found that when Luo recommended Notes to customers, he relied on information from a superior at Westrock. However, despite assurances from superiors, Luo had suspicions on the vitality of the notes. He testified that his bosses representations about Westrock’s future were “a little too good to be true.” In addition, Luo consulted with an attorney friend regarding information he’d be told about the state of Westrock and a pending acquisition by a Native American owned company, LBC Western, Inc.

Luo’s customers had conservative risk tolerances and financial profiles not suited for purchasing the high-risk, speculative notes. Luo argued that his reliance on information from management when suggesting the purchase of the notes. However, the Panel found that Luo had sufficient information to identify the Notes as high-risk. Furthermore, Luo was found to have interfered with the Hearing Panel’s disciplinary process but contacting his customer and suggesting that FINRA had “tricked” her.

This most recent Complaint stem’s from Luo’s appeal of the Hearing Panel’s decision and the sanction of a permanent ban from FINRA. The National Adjudicatory Council upheld the Hearing Panel’s original decision and upheld the sanctions placed on Luo. The Board concluded that “the losses suffered by GD and CWC (Luo’s customers) were the foreseeable, direct, and the proximate result of Luo’s misconduct.

Did you lose money after working with Jaoshiang Luo, a former broker who was employed by Westrock Advisors, Inc.? If you invested money through Jasoshiang Luo and suffered a loss, you may be eligible to file a claim for compensation. Contact Sonn Law Group today.