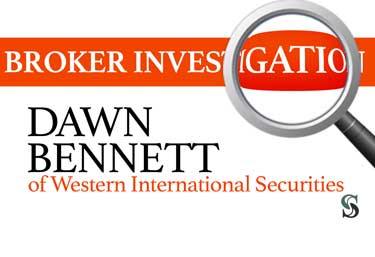 The former host of a financial services radio show, Dawn Bennett (CRD#: 1567051) was a registered representative of Western International Securities, Inc. (CRD#: 39262) from October of 2009 to December of 2015. During this time, Ms. Bennett was based out of a branch office in Washington DC.

In 2015, she was permitted to resign from the brokerage firm following allegations that she engaged in promissory note fraud through an outside company that she owned and operated.

Around the same time, the Securities and Exchange Commission (SEC) fined her $600,000, ordered disgorgement totaling $556,102, and permanently barred her from the securities industry following its conclusions that she engaged in fraud.

The SEC filed a civil claim against Dawn Bennett, a co-defendant named Bradley C. Mascho, and her company DJB Holdings, LLC in the United States District Court of Maryland. According to the allegations raised by the federal agency, Ms. Bennett took in more than $20 million from at least 46 different investors from 2014 to 2017. This period extends back to the time that she was employed as a representative of Western International Securities.

False Promises Were Made to Investors

In late 2014 and early 2015, the SEC believes that Ms. Bennett and Mr. Mascho began soliciting investment in convertible promissory notes. They promised that they would be able to get a guaranteed 15 percent interest rate on a promissory note with a 36-month maturity date. Further, investors were told that the promissory note could be converted into shares of stock in her “successful” company: DJB Holdings, LLC.

Material Misrepresentations Were Made

The SEC alleges that Ms. Bennett and Mr. Mascho materially misrepresented key facts pertaining to financial performance and operating condition of DJB Holdings, LLC. In reality, this company was failing. Among other things, investors were misled regarding sales, profits, net income, expenses, and the true purpose of the money being raised. For example, sales were overstated by nearly 200 percent, and net income was represented as $1.2 million annually. In reality, the company lost $1 million per year.

To keep the fraud scheme afloat, the SEC believes that Ms. Bennett and Mr. Mascho used Ponzi scheme tactics. They used the money raised from new investors to pay original investors more than $3.3 million in interest and redemption payments. The SEC believes that many millions were siphoned off by Ms. Bennett to pay for personal expenses, including for unrelated legal bills, rent, and luxury goods.

Get Help From Our Ponzi Scheme Attorneys Today

At Sonn Law Group, our securities fraud lawyers have extensive experience representing investors who lost money in Ponzi schemes. If you or your loved one was the victim of a Ponzi scheme or any other type of investment fraud, we can help. For a free, no strings attached consultation, please do contact our law firm today.