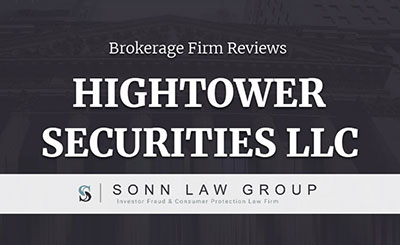 Hightower Securities, LLC (CRD#: 116681/SEC#: 8-53560) is a brokerage firm that is regulated by the Financial Industry Regulatory Authority (FINRA).

With a main office in Chicago, Illinois, the firm is licensed to operate in all 50 U.S. states and in several territories.

According to information accessed through FINRA’s BrokerCheck tool, Hightower Securities has no active regulatory disclosures on its securities industry record.

More specifically, our law firm is reviewing allegations that brokers and advisers at this firm improperly sold worthless and fraudulent GPB Capital securities to unsuspecting investors. Below, we keep a running list of links and new stories involving brokers and financial advisors associated with Hightower Securities.

Do you have a complaint about Hightower Securities LLC? We want to hear it.

In September of 2018, Massachusetts regulators announced an investigation of more than 60 registered broker-dealers that offered GPB Capital securities to investors. Notably, GPB Capital Holdings is being investigated as a giant Ponzi scheme by a number of different state and federal agencies, including by FINRA, the SEC, and the FBI.

In recent months, there have been many important developments in the investigation into GPB Capital. Last fall, the company suspended redemptions for its key investment funds. Soon after, a former high ranking employee of GPB Capital accused the firm of being little more than a multiple-million dollar Ponzi scheme in official court proceedings. Then, the alternative investment company’s New York City offices were raided by law enforcement officers and securities regulators.

Unfortunately, many different private placement investment funds are affected. Specifically, some of the GPB funds that are implicated in the Ponzi scheme investigation include the following:

Did You Invest in a GPB Capital Investment Fund?

If you invested in any of the aforementioned funds, or any other GPB Capital investment fund, you should consult with an attorney. Financial advisors and brokerage firms may be held legally liable for offering GPB Capital securities to their customers.

Licensed broker-dealers have an obligation to conduct basic due diligence for their clients. In the case of GPB Capital, it is clear that many failed to do so. These risky, potentially fraudulent private placement investments were sold to far too many innocent investors.

If you were offered any GPB Capital financial products by a representative of Hightower Securities, and you suffered losses, it is imperative that you reach out to an experienced investment fraud lawyer right away.

At Sonn Law Group, our FINRA arbitration lawyers are proud to be leaders in the field of investment loss recovery. If you or your family member was sold GPB Capital Holdings private placements by  Hightower Securities or any Hightower Securities broker, we can help. Our attorneys handle all investment fraud claims on contingency — you only pay if we win your case. To set up your free, no obligation initial consultation, please contact our legal team today.