SEC Alleges That The Heartland Group Ventures, LLC is a $122M Ponzi-like Scheme 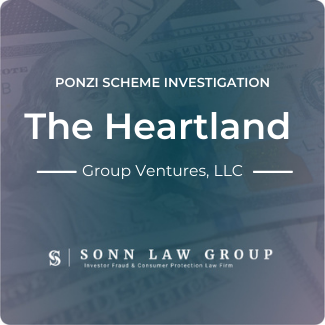 INVESTORS: The SEC has obtained emergency relief and charged The Heartland Group Ventures, LLC – in addition to ten related entities and five associated individuals – of being a $122 million fraudulent oil and gas offer.

If you have invested in The Heartland Group Ventures, LLC or any of the associated entities or individuals, we want to hear from you, as you may have options to seek financial damages. Contact us now to discuss your rights and options with an investment fraud attorney at Sonn Law Group.

Worried about your investments with The Heartland Group Ventures?
Submit the short form below to schedule a free consultation.

What are the Specific Allegations Made Against The Heartland Group Ventures, LLC in the SEC Complaint?

Below is the text from the SEC’s complaint regarding The Heartland Group Ventures, LLC:

4. Between at least February 2019 and September 2021, the Heartland Defendants directed a total of more than $54 million of Heartland investors’ money to Defendants Manjit Singh (aka “Roger”) Sahota (“Sahota”), ArcoOil Corp. (“ArcoOil”), and Barron Petroleum LLC (“Barron Petroleum) (collectively, the “Sahota Defendants”) and a third Sahota entity, Relief Defendant Dallas Resources Inc. (“Dallas Resources”), for projects involving working over existing oil and gas wells or drilling new wells. The Heartland Defendants entrusted the bulk of the money they spent on oil and gas well projects to the Sahota Defendants and Dallas Resources despite receiving numerous red flags regarding their use of investor funds and the projects, including Sahota’s repeated refusal to provide requested information about title, project status, revenue, and costs.

5. The Sahota Defendants and Dallas Resources used millions of dollars in Heartland investor fund proceeds to purchase a private jet, a helicopter, real estate in the Bahamas, and on other non-oil and gas expenditures for themselves.

6. The Sahota Defendants also made material misrepresentations to Heartland, its investors, and persons who solicited prospective investors about the existing and potential production of wells, including by providing periodic statements that reflected materially inflated or otherwise altered oil production revenues for certain wells and a reserve report that reflected a materially altered valuation for gas reserves. Defendant Sahota also made misrepresentations about projected production of a gas well that was being drilled to Heartland personnel, persons who solicited investors, and at least one investor who attended an April 2021 field trip to the drill site.

7. The SEC sues to enjoin the Defendants’ misconduct; to marshal
and safeguard assets for the benefit of investors; to prevent further harm to investors; and to hold defendants accountable for their violations of the federal securities laws.